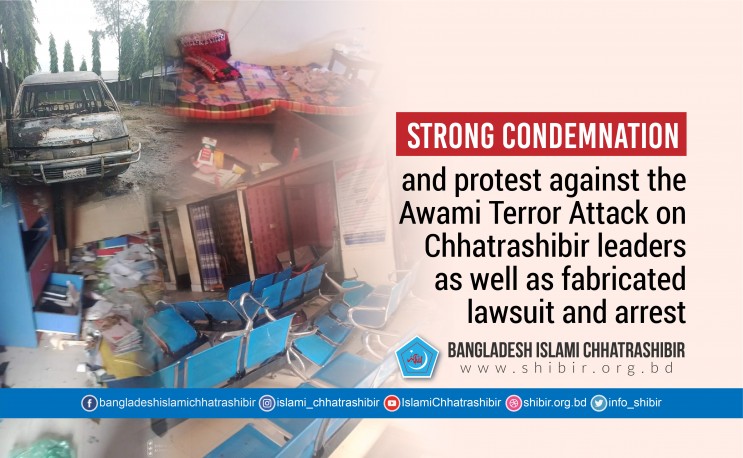 Bangladesh Islami Chhatrashibir has strongly condemned and protested the false police case and arrest of the leaders and activists of Shibir-Jamaat associated persons in Comilla's Laksam after those arrested themselves became victims of extensive vandalism, looting and arson of their businesses and educational institutions.

In a joint protest message, Chhatrashibir Central President Salahuddin Ayoubi and Secretary General Rashedul Islam said the police administration had once again taken to the ground to implement the conspiracy of the ruling Awami Fascist government to hold a one-sided mock election without voters. On September 8, Awami terrorists in Laksham vandalized, looted and set fire to the businesses and various educational institutions and houses of Jamaat affiliated persons without any reason or provocation. During this time, the terrorists vandalized 1 hospital, 1 school and set fire to 1 microbus. Additionally, 15 businesses, 6 houses, 2 cars were also destroyed with a loss of 4 to 5 crore taka. At that time they injured 8 leaders and workers. The hired terrorists were led by local leaders and activists of Awami League, Sechhashebak League and Chhatraleague which was also publicized in various media. But without arresting or taking any action against the identified terrorists, the police arrested three Shibir activists and three Jamaat activists on Wednesday morning on September 15, and later arrested two Chhatrashibir activists from the campus and filed a false case against them under the Anti-Terrorism Act.

Chhatrashibir leaders said the police were playing the role of obedient servants of the Awami terrorists without heeding their sacred duty and responsibility. The police have implicated them in false cases for political gain motivated by nefarious political motives. This irresponsible act of the police is a hate crime. The people do not have the slightest confidence in the police as they are playing the role of party affiliated terrorists and servants while being paid by the people's money, which is shameful yet an established fact in Bangladesh. We strongly condemn and protest against this heinous crime of the police.

The leaders said, "We demand immediate withdrawal of this false case, the unconditional release of the arrested Shibir and Jamaat activists, and the arrest of identified Awami terrorists." At the same time, the leaders called on the law enforcement agencies to refrain from such heinous acts in the future.