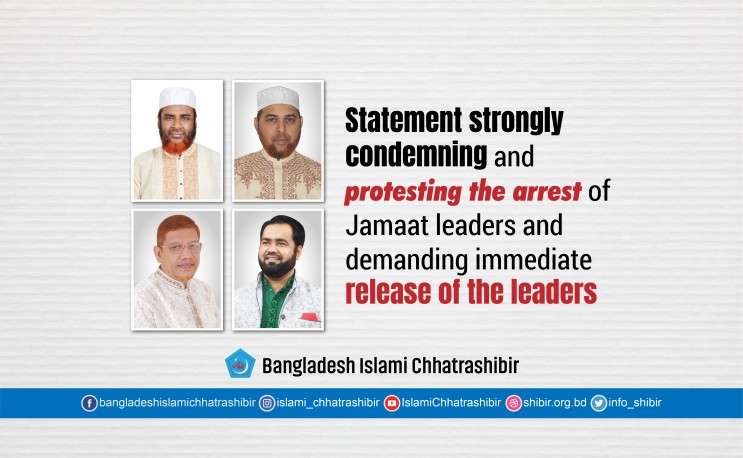 Chhatrashibir statement strongly condemning and protesting the arrest of Jamaat leaders and demanding immediate release of the leaders.

In a joint protest message, Chhatrashibir Central President Salahuddin Ayoubi and secretary general Rashedul Islam said Jamaat-e-Islami is a constitutional, democratic and popular political party representing the people. Jamaat-e-Islami is relentlessly working for the welfare of the country and the nation in the face of oppression at the hands of the present government. Today, September 6, Jamaat leaders and former central presidents of Shibir were unjustly arrested from a regular party meeting without any reason. With these arrests, the illegitimate Awami government has set a bad precedent of political revenge and bankruptcy. Earlier, the Awami government had kept the leaders arrested in jail for long periods of time through trumped up unjust politically motivated cases. Fearing shameful consequences for their actions, the unpopular government has been arresting and torturing Jamaat-Shibir leaders and activists without any reason since it came to power illegally. By seizing the country's top leaders unjustly, this unpopular government has shown how morally bankrupt and corrupt it has become.

The leaders said the government should remember that the arrested people are popular leaders and among them are former Members of Parliament. Despite their repeated arrests, the genuine people of this country have shown patience and restraint. But if such injustice against innocent popular leadership continues, the people's patience will wear down very soon. We demand that those arrested, including Professor Mia Golam Parwar, must be released immediately.