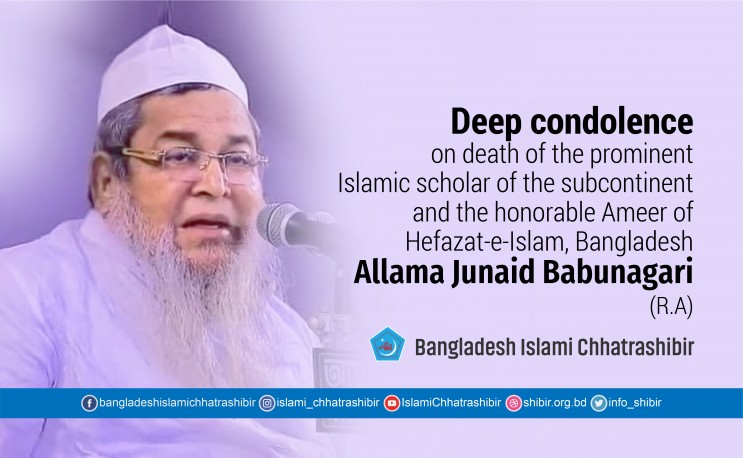 Deep condolences on the demise of Allama Junaid Babungari Rahimahullah, the eminent religious scholar of the subcontinent and respected Ameer of Hefazat-e-Islam Bangladesh.

In a joint condolence message, Chhatrashibir Central President Salahuddin Ayubi and Secretary General Rashedul Islam said that respected Islamic scholar Allama Junaid Babungari Rahimahullah had passed away at CSCR Hospital in Chittagong around 12 noon today. At his death, the nation lost a great guardian. He is a shining star not only in Bangladesh but also in South Asia. Just as he himself was a religious scholar, he played a crucial role in creating hundreds of thousands of scholars in the land of Bengal. He has also written many books on various aspects of Islam.

On the other hand, he was a respected personality regardless of party affiliation. He played an important role by speaking out against the anti-Islamic elements and practices in the country, and strongly spoke on the issue of the unification of the Ulema community. He was uncompromising in defending Islam, the independence of the country and the rights of the people. He led the protests against the demolition of the Babri Masjid located in India, against the construction of the Farakka Dam; he led the movement against the desecration of Islam by the athiest personality Taslima Nasreen, the protest against the government's enactment of anti-fatwa laws and the anti-atheism movements. Through the establishment of Hefazat-e-Islam, he united the scholarly community and the common people and created an intense mass movement to stop the march of atheism by the grace of God. His role in defending the independence and sovereignty of the country was very strong. While performing his religious duties from an uncompromising position, he was repeatedly tortured by the Awami government. He fell seriously ill as a result of torture in police remand for a long time. However, no amount of the cruel torture could divert him from the path of truth and justice. It is truly a sad moment that this great scholar has passed away during this critical transition period of the nation. His glorious role for Islam, the country and the people will always be remembered by the scholar society and the nation, insha Allah.

We seek forgiveness of the soul of the deceased from the Almighty and extend our deepest condolences to his bereaved family members. May Allah Almighty accept this scholar of Islam as the guest of Jannatul Ferdous. Ameen.