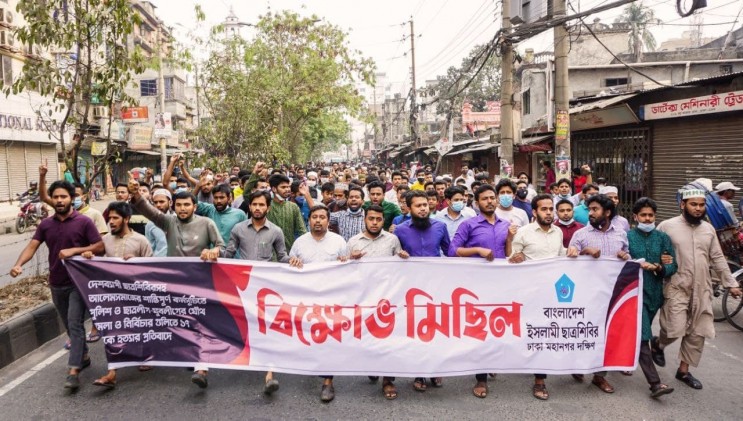 Taking part in the protest rally, the Shibir leaders said that the fascist illegal government has indiscriminately killed the patriotic and Islam-loving students to please their foreign lords.

Demonstrations, strikes, protests, and expressions of opinion are the basic rights of every citizen ensured by the constitution. And the law enforcement agencies are supposed to help the most in terms of protecting and enforcing that right. But in the last few days, law enforcers along with armed terrorists of Chhatraleague and Juboleague have carried out atrocities against the people participating in legal and peaceful programs in different parts of the country including Dhaka Baitul Mukarram, Hathazari, Jatrabari, and Brahmanbaria.

17 people including students have been martyred by indiscriminate firing. Numerous innocent unarmed protesters have been injured and bloodied by bullets and tear gas, many of whom are still in critical condition. Without any provocation, police attacked a peaceful Shibir procession in Sylhet and arrested 15 people. They looted 14 motorcycles belonging to the procession leader members like robbers. This barbaric torture, arrest, and murder is not an isolated incident but is well-planned.

The government has sold its conscience to the foreign imperialists by excluding the people of the country on the occasion of the 50th anniversary of independence. On the one hand, unannounced curfew has tried to block the means for the people to celebrate Independence Day and on the other hand, it has made the foreign lords happy by shedding the blood of the innocent people of the country. The government, in a cowardly manner, has carried out brutal atrocities with the use of police and party terrorists. The countrymen are stunned and outraged by the brutality of the police in the guise of law. People today cannot differentiate between the police and Awami terror. However, even before, the police have carried out such barbaric killings to fulfill the wishes of the illegal government. In order to serve the illegitimate fascist government, the police have become terrorists in uniform.