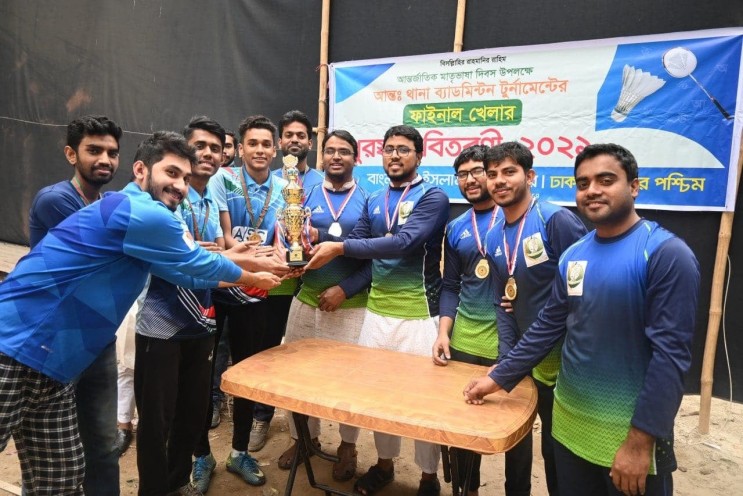 Taking part in the program announced by the central wing, the Shibir leaders said that the heroic children of this country have set a unique precedent in the history of the world by sacrificing their lives for the Bengali language. They attained the right to language by sacrificing their own blood. This sacrifice has gained worldwide recognition. As a result, not only in Bangladesh but all over the world, International Mother Language Day is celebrated every year. Bengali is now the seventh most spoken language in the world. A nation has emerged on the world map based around language, and it is called Bangladesh. The language movement and this achievement has taken the nation to a respectable position on the world stage. The main reason for the sacrifice of the martyrs for the mother tongue was the introduction of Bengali language everywhere. It is through this language that our literary culture and tradition is supposed to be expressed. But sadly, we have forgotten the main purpose of the sacrifices of the martyrs. Despite the importance given to Language Day, the language heroes have not been given their due because of shameful political enmity. Professor Ghulam Azam, a top leader of the Language movement, instead of being respected, has been harassed by the state. As a result, he had to die while in jail. The families of other language heroes and martyrs are also being neglected. The calls and demands of the language heroes are being underestimated and neglected.

On the other hand, the Bengali language is constantly being undermined by the import and spread of foreign culture under the patronage of the state. The language for which young students risked their lives, took to the streets and laid down their lives in the line of police firing, is in great danger today. Bad-intentioned people are deliberately trying to create a mess by mixing our language with foreign languages. Due to the influence of foreign culture, a large part of the next generation is becoming accustomed to speaking and behaving in English and Hindi. It is a major sign of danger for the nation. If the tide of bad culture continues in this way, the nation will soon lose its original spirit. It is important to take effective steps to overcome this situation. It is time to formulate a comprehensive language policy and language law. In all cases, policies need to be formulated and implemented for learning and speaking the Bengali language correctly. Effective steps must be taken to prevent language distortion. In the same way, one has to reject the impact of foreign culture from one's own position. In order to protect self-esteem, culture must be nurtured and developed on the basis of Islamic values. Only then will the sacrifices of the martyrs become meaningful.

Dhaka metropolitan West
On the occasion of International Mother Language and Martyrs' Day, handwriting competition, inter-thana badminton tournament and distribution of alphabet books among street children was organized by the Dhaka Metropolitan West Branch of Chhatrashibir. Secretary General Rashedul Islam was present as the chief guest at these functions. Leaders and activists of different levels including Metropolitan President Abdullah Al Maruf were present at the time.

Chittagong metropolitan North
The Chittagong Metropolitan North Branch of Chhatrashibir celebrated International Mother Language and Martyrs' Day by organising activites towards imparting literacy among the illiterate. The president of the metropolitan branch led these programs which were held in different places of the city. Leaders and activists of different le[In reply to Muaz]
vels were present at that time.

Chandpur city
The Chandpur city branch of Chhatrashibir organized a discussion meeting on the occasion of International Mother Language and Martyrs' Day. Central Student Welfare Secretary Jubaer Hossain Rajan was present as the chief guest on the occasion. Leaders and activists of different levels including city president and secretary were present at the time.

Magura district
The Magura district branch of Chhatrashibir celebrated the International Mother Language and Martyrs' Day through a colorful bicycle race competition. Leaders and activists of different levels of the district participated in it.

Sunamganj district
Chhatak Shibir branch of Chhatrashibir Sunamganj district celebrated the occasions by distributing alphabet books among the children. District President Abul Hossain was present in these programs. Leaders and activists of different levels including District Office and HRD Secretary Zakir Hossain were present at the time.

Chittagong District North
The Chittagong District North Branch of Chhatrashibir celebrated International Mother Language and Martyrs' Day by distributing alphabet books among children and holding football tournaments. Leaders and workers of different levels participated in these programs under the leadership of the district president.

Comilla District South
Chhatrashibir's Laksam city branch in Comilla district south organized a discussion meeting and prayer mehfil on the occasion of International Mother Language and Martyrs' Day. Leaders and activists of different levels including district president and city president were present on the occasion.