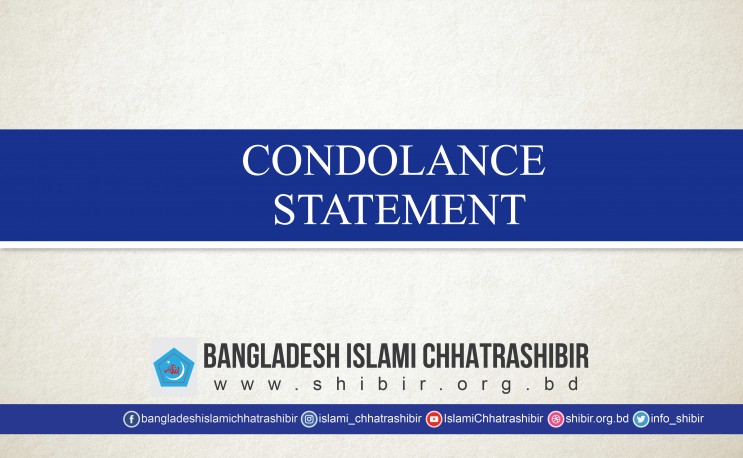 Bangladesh Islami Chhatra Shibir has expressed deep grief over the death of Maulana Abdus Sobhan, a leading politician, Naib-e-Amir of Bangladesh Jamaat-e-Islami, former MP, renowned scholar and one of the country's top leaders of the Islamic Movement.

In a joint condolence message, Central President of the Chhatra Shibir, Md. Sirajul Islam and Secretary General Salahuddin Ayubi, said that Maulana Abdus Sobhan, the beloved leader of the Islam loving masses, died at 1 pm afternoon today (Inna lillahi wa inna ilaihi raajioon). At the end of his life, he died in a state deprived from family attention and advanced medical care, due to him being detained in a government-organized case. The Islam loving general public is deeply saddened by this tragic death.

The leaders said that Maulana Abdus Sobhan is a shining example of healthy politics. He was the favorite leader of the masses. The proof of this is that he was elected a Member of Parliament thrice. He was not just beloved in Pabna, but he was loved by people throughout the country.

Referring to him as an advanced leadership example for the Islamic Movement, the leaders said that despite hundreds of obstacles, torture and slander, he did not deviate from the great ideals of Islam even by a bit. He has struggled to establish Islamic society in the soil of this country. He suffered persecution but did not bow down to wrongdoing.

The leaders further said he was a victim of political retaliation. Jealous of his popularity, the popular senior leader was imprisoned through injustice in the name of justice. We want to make it clear that by killing, torturing and imprisonment of the top leaders of Jamaat, the government could not do any harm to the Islamic movement . Rather, by the grace of Allah, our respected leaders have become the lighthouse of inspiration for millions of youths and activists of the Islamic Movement. No matter how blatant the illegal government may have become in its slander, the people of Bangladesh will remember him with great respect for his unmatched role in defending the country and Islam, Insha Allah.

The leaders prayed for forgiveness of the departed soul and prayed to the Almighty God to grant patience to the bereaved family.