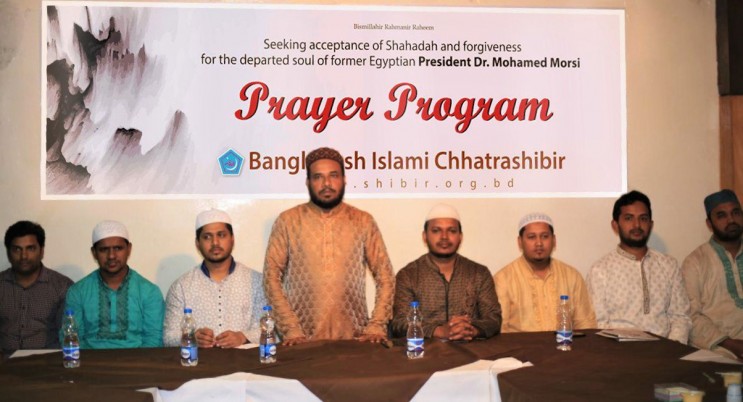 Bangladesh Islami Chhatrashibir central president Dr. Mobarak Hossain said that the death of Shaheed Dr. Muhammad Morsi does not mean that his legacy has ended. Rather he is now the inspiration of millions of young people of the Islamic movement and the Qur'an loving youth throughout the whole world.

He said this at a dua program on the occasion of the demise of Egypt's only democratically elected President and one of the foremost leaders of the global Islamic movement Dr. Muhammad Morsi, held at an auditorium at the capital Dhaka today, where he was the chief guest. The program was conducted by Secretary General Sirajul Islam, and other office bearers including the central office secretary were also present.

The Shibir president said Egypt's history was the history of tyranny and oppressive rule. Breaking this continuity, Muhammad Morsi was the first President in the history of Egypt to take power in a democratic way through the people's vote. But the autocratic and imperialist powers were unable to tolerate Egypt's highly popular president. Morsi was ousted illegally in 2013 by General Abdul Fattah al-Sisi by a military coup with the help of Zionist and foreign conspirators. He was then slowly pushed to death after being jailed in false allegations and kept illegally in prison for six years.

At the same time, the people of Egypt and the Muslim Brotherhood leaders and workers are facing killing and torture, and thousands of leaders and activists have been imprisoned. The genocidal brutal Sisi has transformed the entire country into a large prison by snatching away democracy, the rule of law, the people's right to vote and justice. But the Islam-loving people did not stay down. They continued the struggle of the Islamic Movement with the highest sacrifice like Morsi.

He said that the death of Dr. Morsi has stirred the hearts of the Muslim Ummah. Islam loving people around the world have been shocked. Billions of young people are feeling the pain of loss. At the same time, they are firmly determined to end the unfinished work left by Shaheed Morsi. On the other hand, the brutal genocider Sisi did not receive anything but endless condemnation and hate. Dr. Morsi will always be a lighthouse to Islam loving students and the dictators like Sisi will be thrown into the dustbin of history.

From today's prayer program, we pray that Allah accepts all the good deeds and martyrdom of Morsi and his life. We pray that Allah gives him high status in Jannatul Ferdous. At the same time, we extend our deep sympathies to the bereaved family members, party colleagues of Morsi and the mourning people of Egypt. We hope that in time, the Islam loving Muslims of Egypt will become more determined to liberate the nation from the pharaonic clutches of power by transforming the mourning into power for liberation.