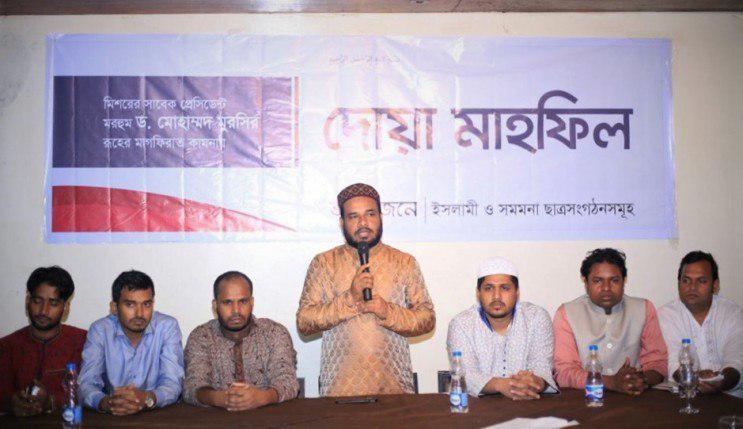 The trial of the murder of Dr. Morsi should be carried out in international court - Dr. Mobarak Hossain

Bangladesh Islami Chhatra Shibir Central President Dr. Mobarak Hossain said that the death of Dr. Hafez Muhammad Morsi, the leader of the global Islamic movement, was not normal. Rather it is a well-planned killing orchestrated by domestic and foreign conspirators. Thus the trial of the murder of Dr. Morsi will be carried out in an international court of law.

The Shibir president said that Morsi had been even deprived of his basic rights after his unfair arrest. He had been suffering from high blood pressure, diabetes, kidney and liver problems for a long time, but he was not given due treatment. He was repeatedly denied the opportunity of meeting with his family members. He was kept in extreme negligence in prison. After collapsing in court, he was left without medical treatment for 20 minutes, until his death was confirmed. Even the autopsy report of the body of the martyr was not handed over to his family. International renowned media have given information about how he was slowly being pushed towards death on a planned basis. This clearly proves that his death has been a well-planned murder.

He further mentioned even after his death, there were a lot of obstacles to Muhammad Morsi's burial. When the family requested for his burial in his own city, the authorities rejected it. According to the government decision, he was buried early in the morning on June 18 at the Nasr area of Cairo, the capital of Egypt in the presence of a few family members and two of Dr. Morsi's lawyers. Nobody else was allowed to participate in the janazah, which is a serious violation of human rights. The world powers cannot play such a silent role in the face of the murder of Egypt's only democratically elected president. If there is silence in the face of such brutality, people will lose faith in the democratic process, which will not be beneficial for world peace. There must be an immediate international trial in the murder of Dr. Morsi. We want to make it clear from today's prayer mehfil that the advance of the Islamic movement cannot be prevented by torture and oppression. Egypt itself is great proof of that. The hearts of the Muslim Ummah and the peace-loving people of the world have been pained at the death of Dr. Morsi. Millions of young people have become convinced to follow his example and continue his work. So the conspiracy of imperialist and autocratic powers will not succeed, Insha Allah. The Muslim Ummah and all the freedom loving people of the world will remember with respect his selfless commitment to the establishment of the Islamic ideology.

Later the leaders prayed to the Almighty for forgiveness for the soul of the martyr Muhammad Morsi.