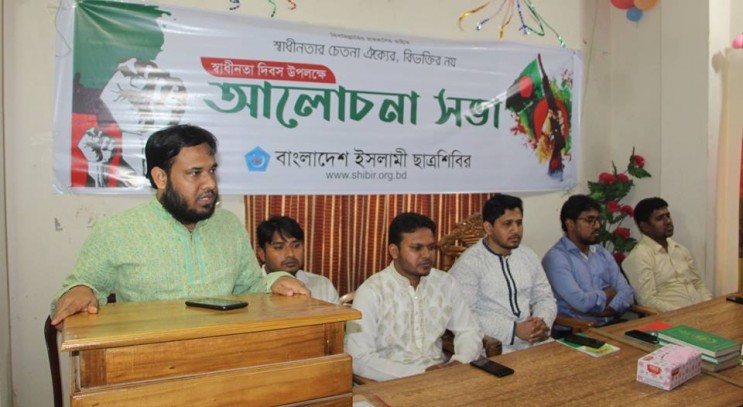 Main aim of independence is to move the country ahead in united manner: Shibir president

Bangladesh Islami Chhatra Shibir central president Dr. Mobarak Hossain said that people of all walks of life have sacrificed their lives in the great liberation war, providing endless sacrifice with one goal in mind. And that goal is to get rid of deprivation and move the country forward in united manner.

He said this while speaking as the chief guest at a meeting held in an auditorium in Dhaka on the occasion of the Independence Day. The central leaders of the organization were present at this discussion meeting held under the chairmanship of Secretary General Sirajul Islam.

The Shibir president said that the 26th of March was an important day in the life of the nation. This day is a symbol of the sacrifice and achievement of the nation. On the Independence Day, we respectfully commemorate the sacrifices of heroes of the nation with respect. The goal of freedom is to establish basic rights, egalite, democracy, justice for the people of this country. But 48 years after independence, we still have to see the fruits of that independence. The main aim of independence is not division but unity. The main goal of victory is to move the country forward in united manner. But today there is a wall of division between each person. If everyone had tried to take the country forward together, then the country would have been far ahead. But the fascist powers in this country are depriving the people of their basic rights. There is no personal freedom. There is no freedom of religion, finance or freedom of expression. Today the bodies of people are being found on river banks, canals and ponds. There is no value of people’s lives, despite the skyrocketing of the price of goods. People are being abducted and killed by crossfire, and many are being repeatedly subjected to torture. The leaders of the ruling party are celebrating the century of rape. Students are being deprived of their rights in various ways on campus. The campuses are becoming mini cantonments. The student organisations in power prevent students from enjoying their rights. They cannot be in anyway a civilized image of an independent country acquired by the sacrifice of blood.

He said that of course, this situation has to change and it has to be done by the young generation. With the aim of attaining real freedom, Shibir celebrates this day every year with due respect. If we want to give Bangladesh its desired future, then it is not possible to have truthful just people without quality change in people, development of ability and the Islamic character. Not on divisions but on the basis of unity, Chhatra Shibir wants to gift a golden Bangladesh. We ask that the students, people of the country pray for us so that we can make a beautiful Bangladesh. Insha Allah, Shibir will go ahead with their blessings and love.

Dhaka Metropolitan North
On the occasion of the Great Independence Day, Dhaka City Metropolitan North Branch of Chhatra Shibir organized a colorful rally in the capital city at Badda, led by Central Office Secretary Salahuddin Ayubi. The rally started at around 8:30 am from Badda Bissho Road and gathered in a meeting. Metropolitan President Azizul Islam Sajib, Secretary Mostafizur Rahman and thousands of other leaders were present in the meeting.

Dhaka Metropolitan South
Dhaka Metropolitan South Branch of Chhatra Shibir conducted a colorful rally on the occasion of 48th Independence Day. At 8 am, the rally under the leadership of the Central literature Secretary, Raziful Hasan Bappi, started from the Gandaria Railway Station in the capital and ended at Jurain crossing. In the meantime, a large number of activists of the branch including the branch president Tofazzul Hossain Helali, secretary Russell Mahmud attended.

Dhaka Metropolitan East
On the occasion of the great Liberation Day, Chhatra Shibir organized a colorful rally and meeting in the East Division of Dhaka City. Leaders and activists rallied and assembled in the Khilgaon area under the leadership of Central Dawah secretary Rashedul Islam. At that time, various leaders and activists of the division, including president Hafijur Rahman and Secretary Mujibur Rahman were present in the meeting.

Dhaka Metropolitan West
Chhatra Shibir Dhaka City's West Branch organized a colorful rally in the capital on the occasion of the Great Liberation Day. At 8am, under the leadership of the Central law secretary Riaz Uddin, it started from Mirpur-1 and ended in front of the Chinese section. At that time, different leaders of the city including City president Jubayer Hossain Rajan and Secretary Enamul Haque were present.

Gazipur metropolitan
On the occasion of the Great Liberation Day, Gazipur Metropolitan Chhatra Shibir brought out a huge rally under the leadership of central foundation secretary Jamil Mahmud. In this rally, hundreds of students including Metropolitan President Mizanur Rahman, Secretary Fakhrul Alam Sifat and others participated. The rallies were held in Gazipur Bishwa Road.

Sylhet Metropolitan Branch of Chhatra Shibir organized a colorful rally in the city under the leadership of Metropolitan President Farid Uddin. A large number of activists, including Metropolitan Secretary, took part in the rally held at 10am.

Cox's Bazar district
Cox's Bazar District Branch organized a colorful rally on the occasion of 48th Independence Day on Cox's Bazar Highway. At 10am, the rally led by President Rabiul Alam traversed the Cox's Bazar-Chittagong highway. Various leaders and activists were present at the time.

Meherpur District
Chhatra Shibir organized cricket tournaments in the various thanas on the occasion of 48th Independence Day. These tournaments were held under the supervision of district and thana level leaders.

Hajiganj Upazila
Hajiganj Upazila Chhatra Shibir organized a football tournament on the occasion of the Great Independence Day. The Upazila president, secretary and different level leaders and general students participated in this event.