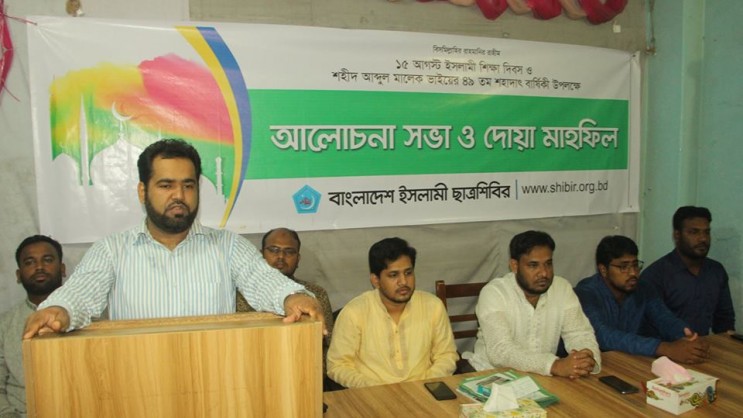 Chhatra Shibir organizes programs across the country on the occasion of Islamic Education Day
Yasin Arafat, the central president of Bangladesh Islami Chhatra Shibir, said that the misery of the nation is that the educated people of this country are depriving the people. They are breaking the backbone of the nation. 160 million people are paying for the corruption of a few people running the government. In this situation, there is no alternative to implementing Islamic education system to save the country from the plague of corruption. If the Islamic education system is not established, then value oriented people will not be created.

The Shibir president said the education is the backbone of the nation. Just like no animal can stand straightforward without a backbone, no nation can stand straightforward without a backbone on the world stage without the moral and religious education established upon a background of national history, tradition, civilization, religious consciousness and ideology. Bangladesh is its most bright examples. There is no shortage of merit in our country. But due to the leakage of question papers and corruption in employment arrangements by BCL and government officials, the country's invaluable assets are being lost through intellectual drain. Again, due to absence of moral values related knowledge among the meritorious at different levels of the state, the country is unable to move forward. Being educated in the current education system, the meritorious are taking the important positions of the state and carrying out corruption freely, which does not only deprive people, but also lowers the dignity of the nation on the world stage. Everything is being looted starting from the bank to the coal stone. On the other hand, social degradation has also become very observable.

If there is no practice of ideological and moral values in an educational institution, then there won’t be ideal people. Instead, unexpected events will happen, and even now that is happening. In the country, a girl is being raped by her father-aged teacher. The consequences of the irresponsibility and dishonesty of the teachers and the education sector are severely affecting the students in many cases. Again, the students of an honorable teacher are themselves humiliating and beating him up. Rape and murder has become a normal matter in the universities. Classmates are not safe with each other. There is a tide of immoral activity in the educational system. The nation is being shamed by the various scandals in educational institutions. The educated are ahead in consumerism, greedy mentality, destruction of morals-ethics and religious social values. They have become a curse for the nation today. However, the national education system today should be based on religious consciousness, ethics-values and ideological grounds, making it people-oriented, reality-oriented and activity based. If there was an infusion of education with morality and ethics, then they would become the wealth of the country, not the curse of the country. The country would have gone ahead in prosperity. But the nation was unlucky. Instead, Islamic spirit and literature are being removed from the textbooks. Immorality is being encouraged by extensively removing Islamic teachings from the books. The results of an education policy of destruction of Islam and Muslim identity has been increasing day by day. This is already bringing adverse results in the society. In the light of the anti-religious education system, education policy will infuse the future generation with anti-Islamic atheism and Hindutva mentality. The results of this will be even more horrific. The real welfare of the nation is not possible without a universal Islamic education system based on Islamic values. At the same time, religious and moral education must be compulsory at all levels by rejecting the anti-religious education system.

He further said that a long time ago Shaheed Abdul Malek realized that a non-Islamic education system would be a curse. His fear has become the reality of today. He was among the meritorious faces of the University of Dhaka at that time. On August 12, 1969, he was brutally attacked by secularists and communists while speaking for the of Islamic education system; he later died from his injuries on the 15th of August. They thought that the killing of Abdul Malek would stop the work of Islamic education. But their dreams were not fulfilled. Lakhs of youth have been working continuously in fulfilling the dream of Shaheed Malek in every place.

He called upon the activists and said that the activists of Chhatra Shibir must be responsible for building morally responsible people. All the students of the country should be educated in moral education and they have to be developed as ideal citizens. The importance of moral education must be highlighted by preaching the message of Islam through Da’wah. People of every profession should be made aware of the benefits of Islamic education system. Insha Allah, our efforts will be successful in time.

Jessore district East
Jessore District Eastern Branch of Chhatra Shibir distributed educational materials among the students on the occasion of Islamic Education Day. District President was present as the chief guest. Different level leaders including the District secretary were present.