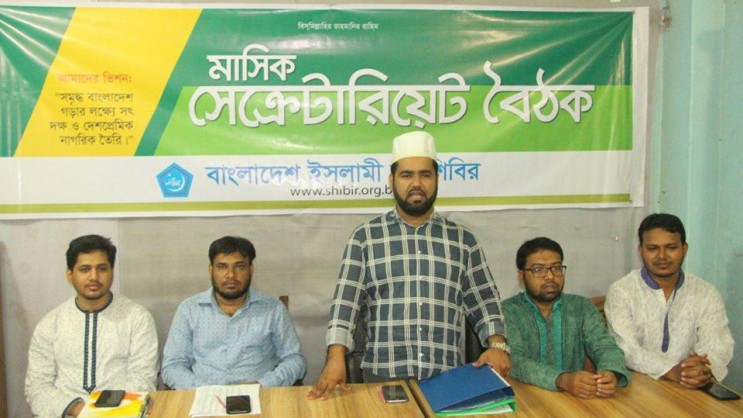 Accept the logical demands of the students immediately - Shibir President

The Shibir president said that every demand of the students was logical and just. Providing punishment for the culprits, not giving license to unfit vehicles, is a demand not only for students, but the public as well. But the government is trying to deceive students. The Home Minister said, the government has accepted all the demands of the students. So after accepting all the demands, how is the shipping minister still in power? Why are the Chhatra League and Jubo League still attack students? Chhatra League affiliated outsiders have been caught in red-handed at the Karwan Bazar market during the vandalism of the vehicles. Even today, buses and police cars are still running without license. Therefore, there is no doubt that the announcement of acceptance of the government is untrue. On the other hand, the the Prime Minister Sheikh Hasina has given terrorists the charge to make the students ‘understand’. Those same terrorists who attacked students in Jatrabari on Wednesday. Those who fall upon one another at the slightest provocation, those who have the blood of many innocent students on their hands, those who openly harass students. They have attacked on every major movement of the student community. The Prime Minister has played a silent role in every attack of BCL. Now it is not only ridiculous to give them this duty but also a clear indication to attack the students. There was fear among parents and students as to whether the Prime Minister gave the responsibility to make understand or attack the students to the Chhatra League.

He also said that students of all walks of life have declared solidarity together with the students. People from all walks of life came down on the streets and expressed their solidarity with the students. It would not be good for anyone to waste time without complying with the demands of the students. Even the shipping minister remains despite all this, the problem will become more acute. We would like to say to the government that where the Prime Minister herself has broken the promises made to the student community in the parliament, the students do not believe in your false talk. The demand of the students must be met immediately so that they may return to their classes. Attackers upon the students from the Chhatra League and Juba League, police and transport workers must be brought to justice. The injured will have to be provided better treatment. Families of students killed in the bus accidents must be given adequate compensation. Overall the highest measures must be taken for the maximum measures for overall students security.