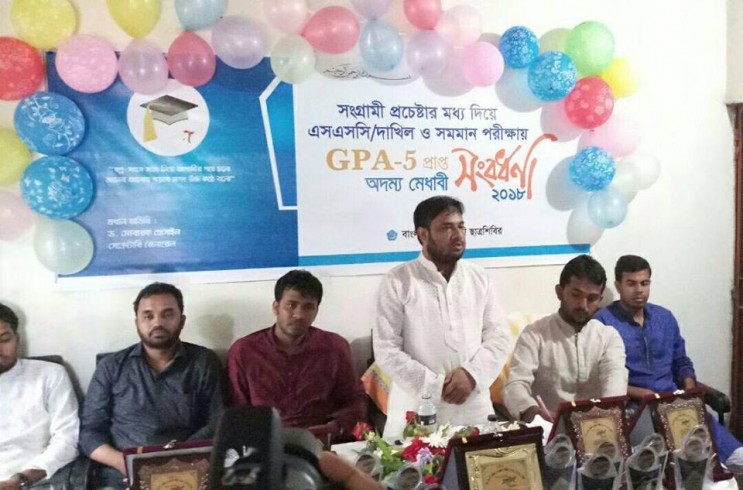 Meritorious should fulfill lack of honest and patriotic citizens

Yasin Arafat, the central president of Bangladesh Islami Chhatra Shibir, said, we are self-sufficient in intellectual property today and it has been proved again today. But there is a lack of skilled craftsmen to create the desired golden Bengal. The expectations of the people will not be met without morally qualified citizens and leaders. In this situation, the meritorious should come forward to fulfill the lack of honest and patriotic citizens.

He said this while addressing an inaugural reception of GPA 5 in the HSC and Alim examination organized by the Dhaka College branch of Chhatra Shibir. Central Literary Secretary Salahuddin Ayubi was present as special guest at the program. Meanwhile, Dhaka College Branch President Mehdi Hasan Sunny, Secretary Abdullah Al Maruf and leaders of various levels were present.

Shibir president said, the meritorious have successfully passed another important step in their lives today. We believe this success will continue in the future. Apart from this achievement, the scope of the nation's expectation has also increased. Despite having thousands of opportunities and adequate opportunities, we are lagging behind only due to the lack of morally qualified citizens and leadership. The reality is that for a truthful person, without much ability, cannot do much for the nation. Similarly, due to lack of honesty, even after qualifying, the nation is also deprived from the contributions of immoral meritorious persons. Rather, the citizens lacking morality are a curse for the nation, the evidence of which is today's Bangladesh. Those who carry out mischief at the expense of the nation every day are among the meritorious. Despite the high potential and adequate natural and human resources, the people are deprived of their benefits due to these morally deficient intellectuals, which makes the nation disappointed. In this situation, today's meritorious should lead of the nation. There must be strong conviction for creating a prosperous Bangladesh among the meritorious.

He further said, the mercenaries should go ahead keeping cognizance of the situation of the day in mind. Sadly, there is almost no scope at present for building ourselves as being genuinely meritorious and honest; by contrast, through state power, education has been been made into a trade, and terrorism, drug abuse, wayward culture and indecency has become common. This is destroying the meritorious student generation. On the other hand discriminatory quotas are being used to deprive the meritorious generation age after age. But we are still not disappointed, because those who successfully completed this important step of their lives today have done a lot of hard work. We hope that they will continue to step away from all the evil views and paths in the future. The meritorious will play an important role against conventional inequality. Chhatra Shibir is moving ahead with the mission to build the talented students as good, capable and patriotic citizens. In order to develop the meritorious, the main effort of Shibir will be to develop talent on the basis of Islamic values, Insha Allah. We hope that today's meritorious students will play a key role in establishing a corruption-free country in the future by joining hands on this path of Shibir.

Dhaka Metropolitan South
Dhaka Metropolitan South Branch of Chhatra Shibir organized an instant reception for the GPA 5 recipients of HSC and Alim examination in the capital. Central Education Secretary Rashedul Islam congratulated them with flowers and sweets and was the chief guest. Metropolitan City President Shafiul Alam and Secretary Masum Tarif along with various level leaders of the city were present.

Rangpur Metropolitan Branch of Chhatrashibir organized a reception for GPA 5 recipients of HSC and Alim examination. Metropolitan President Samiul Islam was present as the chief guest. Various leaders and activists of the city were also present.