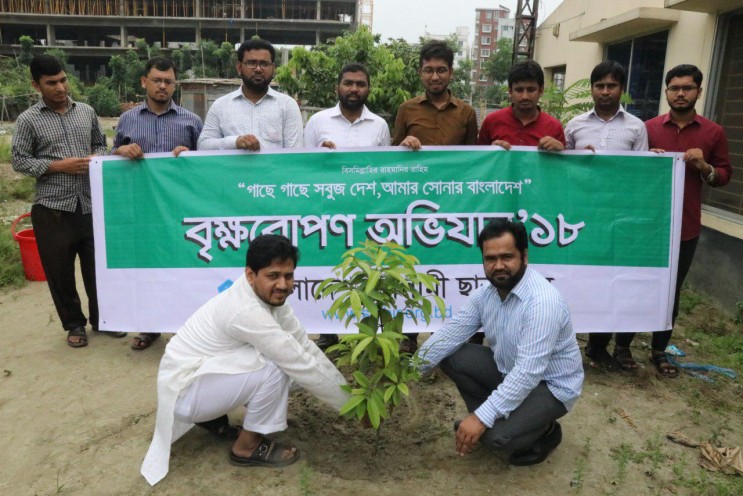 Its urgent to turn tree planting into a social movement

Central president Yasin Arafat, while taking part in the planting program in the capital, said that, "Natural disasters have taken up a terrible form in this country and are increasing day by day. And if the country is affected by natural calamities, its impact is on the people of all classes. One of the key ways to avoid the menace is to control deforestation and plant more trees. There are no specific areas or limits for this activity. Trees must be planted everywhere. Our tree plantation campaign must be made successful as part of our responsibility to the country. This is a responsibility of people of all walks of life and they must be encouraged to do so. Tree planting is a worship and a work of great reward. The Messenger of Allah said, 'If the Resurrection were established upon one of you while he has in his hand a sapling, then let him plant it (Sahih Bukhari).’ The tree is associated with our existence. If we can make tree planting a social movement, it is possible to form green country full of trees in a short span of time.

He also said that the government is not giving importance to this issue even after understanding the important role trees play in tackling natural disasters and leading to economic development. Rather, forests and road side trees are being cut by government officials and partymen. The government is not taking any effective initiative to stop it. Chhatra Shibir has been hosting the tree planting program every year from its responsibilities towards the nation and the state. In this year, leaders and activists have taken steps to plant and distribute more than 10 lakh trees in the country, out of which 100,000 saplings have been planted today. We invite all students to participate in this initiative of Shibir.

It should be noted that Chhatra Shibir has announced tree planting campaign program from July 11 to July 17 this year. In order to make the program successful, all the manpower in the country will plant a single seedling, forest or medicinal plant and distribute two seedlings. Besides, Chhatra Shibir will organize programs such as colorful rallies, banners, festoons and stickers to create public awareness, advertisement in local newspapers, to plant trees.

Dhaka Metropolitan West
In the capital city at Mirpur, at around 10.00 am, Shibir organized a tree plantation program in Dhaka City's Metropolitan West Branch. Secretary General Mobarak Hossain distributed the tree saplings among the general students and pedestrians while being present as the chief guest. Metropolitan President Abdul Alim, Secretary Jubair Hossain Rajan, organizing secretary Enamul Haque and various leaders of the city were present in the meeting.

Dhaka Metropolitan South
The Dhaka Metropolitan South Branch of Chhatra Shibir organized a colorful rally in the morning at 10 am in Gandaria area of ​​the capital. Central education secretary Rashedul Islam led the program. During the rally, the leaders distributed the tree saplings among the pedestrians on the way. Metropolitan President Shafiul Alam, Secretary Masum Tarif and various leaders of the city were present in the meeting.

as the chief guest, the distribution of trees among ordinary students and pedestrians was done by Sohel Rana Mithu, a member of Central Executive Council. Metropolitan President Tofazzul Hossain and various leaders of the city were present in the meeting.

Brahmanbariya District
Chhatrashibir B. Bari Sadar Upazila has planted and sown the plants. In this, different level leaders and workers of the division took part.

Rajshahi Metropolitan
Planting and distributing of plant saplings took place in different places of Boalia thana of Rajshahi City; activists planted and distributed them. Various leaders and activists participated in this.

Nangalkot Upazila
Nangkalkot Upazila of Chhatra Shibir organized a central program by transplanting and distributing various types of trees. All the leaders and activists took part in this.

Pabna city
The leaders and activists did planting and distributing of saplings at different places of Pabna. At that time, the leaders of the different levels including the president of the branch were present.

Pabna district east
As part of the central program, Pabna District Eastern Branch of Chhatra Shibir has planted saplings in different places of the district. In this, different level leaders and workers of the division took part.