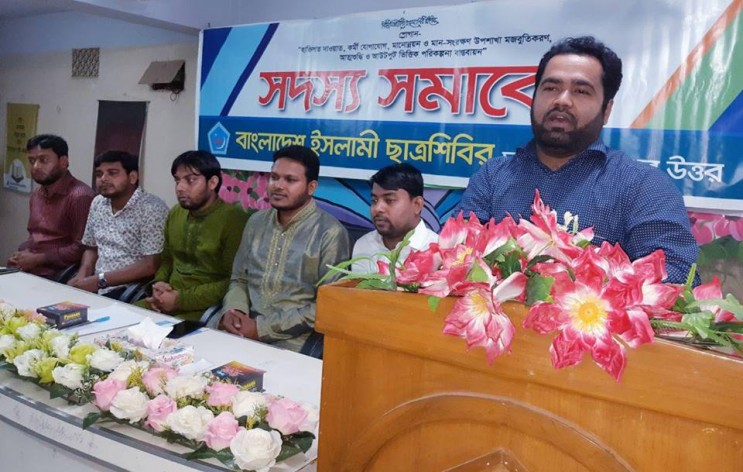 Government resorting to repression in fair demand movement by students

Yasin Arafat, the central president of Bangladesh Islami Chhatra Shibir, said that instead of fulfilling the promise of reforming quota, the Prime Minister had set BCL terrorists loose on the protesting students. The government is continuing to resort to repression in fair demand movement by students.

He said this while addressing a member gathering organised by Chittagong Metropolitan North Chatra Shibir in an auditorium at Chittagong today. Presided over by Metropolitan President Abdul Jabbar and conducted by Secretary A S Raihan, Central Literary Secretary Salauddin Ayubi attended the meeting as the special guest. Different level leaders of the city were also present at the function.

Shibir President said that on June 29, when a peaceful press conference was being convened to announce the demand for a directive on the quota, central BCL vice-president Aditya Nandy, Arifur Rahman Limon, Mehdi Hasan Rony, Masud Rana Mithu, organizing secretary Darus Salam Shakil and other BCL terrorists attacked the quota reform movement leaders with sharp weapons upfront and tortured them in front of the public for a long time. Many quota reform leaders were seriously injured in the attack by the BCL. They were admitted to hospital in critical condition. Even today, BCL attacked in the same manner in RU. Rashed Khan, a leader of the quota movement, has been arrested unjustly. The Prime Minister herself announced the acceptance of quota reform movements. Therefore, it was normal to declare the directive to be implemented. But amidst such a peaceful program, the demonic character of BCL has been exposed in front of the nation through their brutal attack. Through this attack the BCL took a position against the student community. This proves that the Chhatra League is not a student organization, but that it is the government gangster force. Earlier, the protesting students were victim to the brutal attacks of police and BCL at night. Such barbaric behavior is not acceptable to the student community. The government has used such shameful tactics to oppose earlier movements as well. Since the government came to power, such fascist behavior has been done against the people and the student community. Because of their lack of morals and strength, they are using the administration and party cadre against the students. But the fate of such fascist behavior is never good.

He said, the Prime Minister has announced the cancellation of the quota system, yet is playing political games without implementing it, which is nothing but cheating with the student community. On the other hand, Chhatra League has attacked the peaceful program. The attacks have been pre-planned. The Prime Minister has not said anything yet. In this situation, there has been a question of public opinion about whether the government is making a new conspiracy to block the reform of the quota. The student community has been involved in the movement to get their rights and this movement has unanimous support from all the student organizations and the people of the country. The students will make their their claims together. The BCL attackers should be expelled from the universities and face exemplary justice. The directive must be immediately issued. Effective measures must be taken for the safety of the students. The injured students should be provided better treatment facilities. Otherwise, if the government makes a new conspiracy to deprive millions of students, then it must be held responsible for any situation that transpires.