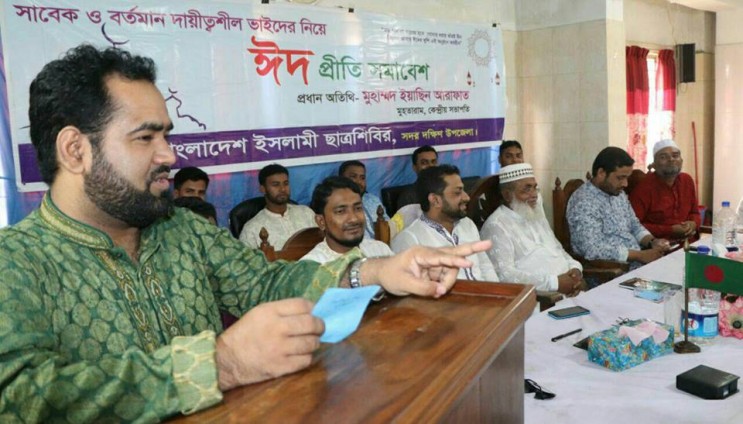 Yasin Arafat, the central president of Bangladesh Islami Chhatra Shibir, said that although Eid was supposed to be a happy occasion for everyone, it was not happy for everyone because of bad governance by the government. Eid joy has faded in many families due to arrest and torture by government.

Shibir president said that the responsibility of restoring Eid celebration of the people was upon the government. Unfortunately, the government has snatched the happiness of Eid-ul-Fitr from the people through misrule and oppression. The country's top leaders have been imprisoned for years as part of political vendetta. Many leaders and activists have been inappropriately imprisoned without any reason. The government has abducted meritorious students Waliullah, Mukaddas, ex-army officer Brigadier Ajmi Azam, Barrister Arman and many others, destroying their families. Many political leaders have been killed for political reasons. Besides the murder of innocent people in the name of crossfire, false cases, party terrorism, and police torture continues. The government has kept the person bring smiles to the family out of the family in an unjust manner. As a result, the joy of Eid in every family victimized by state oppression has faded. They had no Eid joy, but in every family there was sadness, which is never expected in a Muslim majority country.

He said despite the hundreds of tortures, the government has not been able to break our morale. It has not been able to deviate us from the path of Islamic movement, because for the workers of the Islamic Movement, there is nothing to lose, because they believe in the path of religion, and have exchanged their lives in Allah’s path. Through the highest sacrifice, our goal is to continue on the path of religion. In the present situation, the manpower of Shibir must strengthen its relationship with Allah. In all circumstances, they have to rely on him. By continuing to play the role of Dayee - Ilallah, it is necessary to accelerate the movement of establishing religion by accumulating all the people under the glorious shade of Islam. We have to work more for the welfare of the people. We need to build ourselves in such a way that the people of the society will never expect harm rather only benefit from us. We must get closer to the people of the society, and be close to their happiness and have to participate in sorrow. The elegant ideals of Islam must be beautifully presented to them.