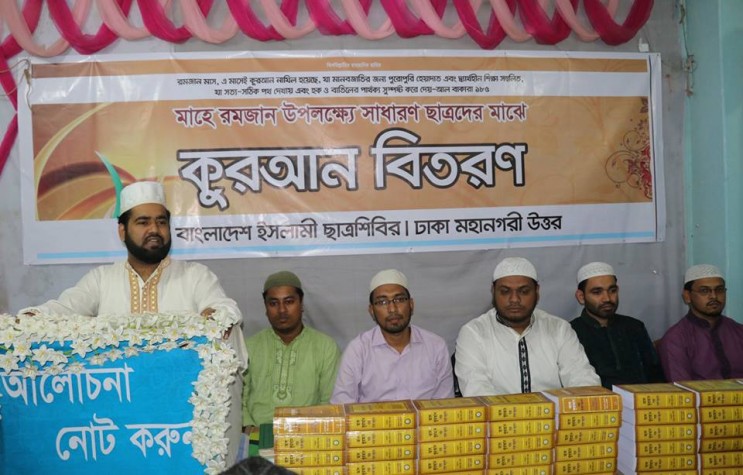 Without the law of the Qur'an, it is not possible to establish the desired society

Yasin Arafat, the central president of Bangladesh Islami Chhatra Shibir, said that al-Qur'ân is not just a religious book. Rather, this great book shows the path to the deviated amongst the human race. The best provisions of human welfare. The path to welfare in life. Without the establishment of the laws of the Qur'an, it is not possible to establish the desired society.

Shibir president said, everyone wants peace and prosperity in the society. But without the Divine laws, true welfare, peace or prosperity is not possible, which has been historically proven. And in the world civilization, a peaceful and prosperous golden society has been constructed only through the Quranic law application. Ramadan is the month of the revelation of the Quran. This month is the golden opportunity for learning the Qur'an and its implementation in society. But the misfortune of the Muslim Ummah has been to not accept this truth even after this great blessing is present. This has no reflection even in the world's largest Muslim country. In contrast, there are endless opportunities to do anti-Qur'anic activities. Only for the Qur'ān's path, celebrated Islamic personalities and students had to give their lives. There are still many prisoners in jail, including the Qur’an lover Allama Delwar Hossain Sayedee. Regular incidents of contempt of the Quran are often happening, which are not subject to any fair trial. It is extremely unfortunate that although the majority of the people of the country are Muslims, and the anti-Qur'anic activities continue defy the Qur'anic law.

He said to the gathered students, that the Qur'an is always modern and applicable to all fields. Therefore, the Qur'anic education must be implemented in every aspect of life. Only the Qur'an can solve all the problems of people, society and the state life. When people lose their way in the darkness, injustice poisons life, only the Qur'an enlightens the nation through the light of possibilities. Therefore, I urge all to be firmly committed to lead a successful life in the light of the Qur'an.

It is to be noted that, as a part of Ramadan initiative the Qur'an distribution program has been announced to distribute at least one Qur'an to every manpower of Bangladesh Islami Chhatrashibir and to teach atleast one person how to the read the Quran