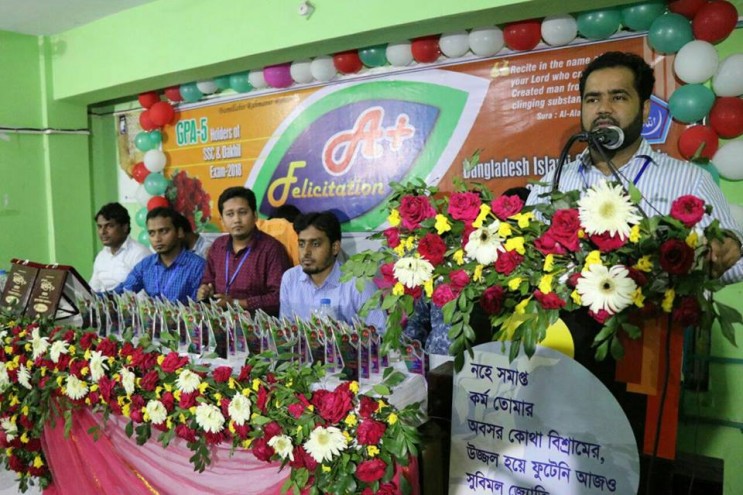 Aim of meritorious community should be the welfare of the nation

Yasin Arafat, the central president of Bangladesh Islami Chhatra Shibir, said meritorious students are the precious assets of a country. Today's meritorious are the artisans to build the country of the future. The welfare of the people should be the goal of the meritorious.

He said this while addressing the reception of the students of GPA-5 in SSC, Dakhil and equivalent examinations organized by Chhatra Shibir Chittagong Metropolitan South. The session was chaired by Rafiqul Hasan Lodi, the president of the unit, while Secretary Imranul Huq conducted the reception. Special guest speech was given by Kamrul Hasan, the central debate secretary, Metropolitan Office Mohammad Hasanat, Law Secretary Md. Yusuf, College Secretary Sabbir Ahmed, School Secretary Hamid Azad and various leaders of the city.

The Shibir president said, if the meritorious can not develop themselves altogether, instead of building the country they will become the tool of destruction. As is the case with the the present. The parents, teachers work hard behind the results, but they almost have no role in formation of moral development. Therefore, the meritorious students should take the initiative of forming their own paths. A lack of morality in the meritorious is something dangerous. It will be a curse for the nation. If a blind person is given a torch he will set fire instead of illuminating the society; similarly moralless intellectuals also cause great damage to the nation. Seeing this scene, the people are tired and frustrated today. Today's meritorious will have to take responsibility for giving new messages of prosperity to this disheartened nation.

He said, even after having such talent, we could not become a self-reliant nation. Because there are a lack of chances of developing intellectuals in the country. That's why although there meritorious students are contributing to foreign countries in their thousands, but are unable to contribute anything to their own home country. A large number of the country's priceless natural resources are going abroad. Due to the knee-bowing policy, other countries are being given an unethical advantage by destroying of one’s own country. This is all due to dependent mentality. If this continues we will slowly lose our identity. Chhatra Shibir has been making strenuous efforts to meet the lack of talented and morality-filled citizens among the population since its inception. In this attempt of Shibir, many talented and ethical citizens have been gifted to the nation.