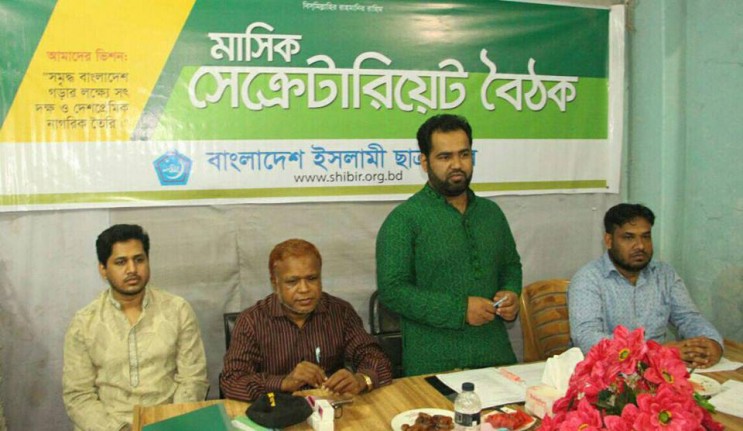 Yasin Arafat, the central president of Bangladesh Islami Chhatra Shibir, has said that the Qur'an is the guide for mankind. In the light of the Qur'an, people, family and society should be formed. There is no alternative to establishing a Quranic society for the peace of the world and the liberation in the Hereafter. Therefore, the student community will have to play a role to spread the message of the Quran to each house.

He said this at a Secretariat meeting of Shibir in the capital. Former central president Nurul Islam Bulbul spoke as special guest at the meeting conducted by Secretary General Mobarak Hossain. Central Office Secretary Sirajul Islam, along with other Secretariat members, was present in the meeting.

Shibir president said the unrest in the country is increasing day by day due to various misdeeds including murder, rape, extortion. Especially the moral degradation of the youth society has threatened the social and family security of the people. Even school-bound students are getting involved with serious crimes such as rape and murder.. The young generation is drowning in addiction and immorality at a very young age, which is being shown on the media. Every parent is now deeply concerned with their children. Through moral decadence, the country and society are increasingly becoming unstable. There is no alternative to living in the light of the Qur'an to protect the youth from this evil power. But unfortunately, the government limits the education of the Qur'an and forms anti-Islamic education policies. To maintain the responsibility and dignity given to the Muslim Ummah, Qur'anic teaching must be ensured and maintained. A man can be the best in the world only when he will be able to live his life in the light of the Qur'an.

He said, al-Qur'an is the only holy book showing the right direction, through which the principle of justice is established. The holy Qur'an is the standard of determining which is good for people and which is bad. Al-Qur'an has the most practical and effective directions towards establishing peace. The month of Ramadan is there. By using the opportunity of Ramadan, the young generation can increase their involvement with the Qur'an. The Qur'an's call should be delivered to every house. Not only the student community, but the people of all classes should be motivated to live their lives in the light of the Qur'an. All the activists of Shibir will have to study the Qur'an more often. Every manpower should distribute atleast one copy of the Qur'an with meaning. It is not possible to protect the youth from the destruction of the modern lifestyle without formation of life in the light of the Qur'an.