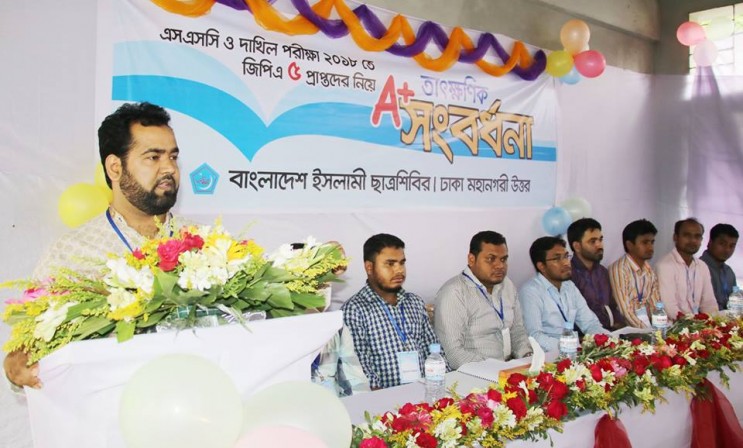 Meritorious students must come forward to build a self-sufficient country

Yasin Arafat, the central president of Bangladesh Islami Chhatra Shibir, said that there is a great lack of able and moral leadership in Bangladesh. And this lack is not allowing the country to reach its desired goal. So the meritorious must come forward to build a self-sufficient country by forming moral career choices.

Shibir President congratulated the meritorious students and said that today we are also happy alongsides your parents and teachers in your success. As a student organization, we dream about you playing a role to build a beautiful country based on eradication of hunger, poverty, and establishment of corruption-free justice. We attained freedom in exchange for many sacrifices. But the nation has yet to enjoy the real benefits of independence. Rather, the country's politics of division has nullified the achievement of freedom, through the practices of corruption, misdemeanor, murder, torture and oppression. The main reason for the misery of the nation is ineffectiveness and morally incapable leadership. And sadly, the educated people themselves play a major role in all crimes including corruption. It is an uncomfortable truth for the nation, that there is a certain class behind almost every exam leak, which is undermining the meritocracy in through an unethical process. That makes us frustrated repeatedly. In this case, the meritorious must play a leading role. If the intellectuals play an active role, then this evil power can not survive. Despite all this, the glorious success of today's mercenaries has given hope to the nation. If they go ahead with the combination of morality and merit, then it will not take much longer for the country to overcome this crisis.

He also said that today's success has increased the expectations of the people. To meet the expectations of the people, the intellectuals will have to go forward with intellect. Temptations will come from different directions in the coming days. Students must be watchful of who are terrorists, extortioners and tender-grabbing people. Chhatra Shibir wants to build a team of students to lead the country by combining talent and morality. Shibir believes that a Muslim must be successful in both this world and in the Hereafter. So, in order to meet the lack of talented moral personalities in the light of the Qur'an, Chhatra Shibir has been making strenuous efforts towards this end from its establishment. Through the efforts of Chhatra Shibir, the nation has gained a number of talented and ethical citizens to the nation. We still have to go a long way in fulfilling the expectations of the nation. And today's meritorious will have to play a leading role.

He congratulated all the GPA-5 meritorious students in the SSC, Dakhil and equivalent exams present and distributed sweets on the occasion.