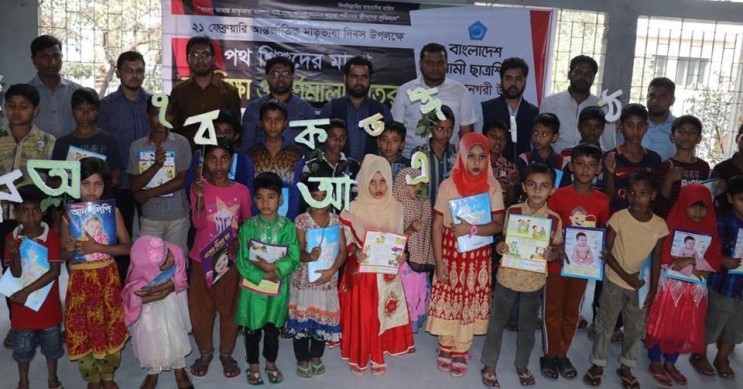 Yasin Arafat, the central president of Bangladesh Islami Chhatra Shibir, said that children of different levels of the country, along with street children, are being deprived of their mother tongue and its correct practice, which will not be right for the future of Bangladesh. Deprivation of the children from their mother tongue is unwanted. Effective steps should be taken to teach Bangla language to the street-children and the underpriviliged.

He said this while addressing the book distribution program among street children on the occasion of International Mother Language Day organised by Chhatra Shibir Dhaka Metropolitan North Branch. Presided over by city president Jamil Mahmud, the function was addressed as the special guest of the program, the central Dawah editor Shah Mahfuzul Haque. At that time, different level leaders of the city including the Metropolitan Secretary Azizul Islam Sajib were present.

The Shibir president said that education is the fundamental birthright of all. It is the responsibility of the state to protect children from any kind of crime. There are currently about 11 lakh street children in Bangladesh who are deprived of almost all rights and benefits. Due to the lack of education and the shirking of responsibility by the state, most of the street children are involved in various crimes. In time they became terrible criminals, which has negative effects on the state and society. It is not possible to build a prosperous Bangladesh through excluding this large number of street children. On the other hand, children are being deprived of Bangla language learning despite availability of adequate opportunities. The children of English medium schools are especially being deprived of the practice of Bengali language. In the absence of any initiative, due to negligence and lack of proficiency in their mother tongue, they are also growing with an inability to love and nurture their mother language despite living within the country. Besides, minority ethnic groups and tribes of different regions of the country are also reluctant to practice Bangla language. There are no adequate measures taken for giving them proper Bangla education. It is unacceptable that the nation's heroic children who have given their life for language will be disrespected due to the lack of appropriate language learning of the next generation. This image will lower the image of Bangladesh in the world stage, which can not be accepted in any way.

He said illiteracy is a social curse. We must protect the streetchildren frim this curse. The abandonment of the Bangla language, which was attained through such sacrifice, is unacceptable. Children love to follow. But due to lack of awareness of the society and the negligence of the state, a large part of children is deprived of mother tongue practice. We need to end and remedy this situation. Immediately, a large number of street children need to be given education to take effective measures to bring them on to the path to education. Private and public aid givers should come forward. Bengali language training must be made compulsory in all educational institutions including English medium schools. Parents must be careful. In addition to the native language of the tribes, state-level effective action should be taken for the practice of Bangla. Otherwise, the sacrifice of the language. martyrs will be in vain and the possibilities of the future Bangladesh will also be threatened