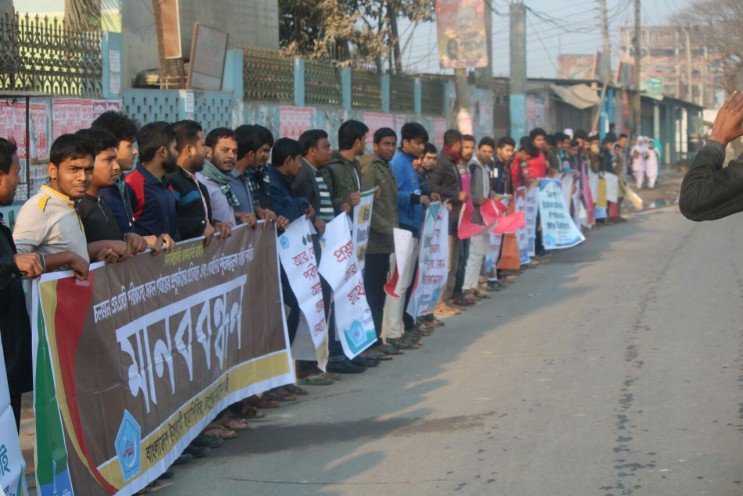 Bangladesh Islami Chhatra Shibir has organized human chain programs throughout the country, including the capital, demanding exemplary punishment for the education minister and for those culprits involved in the question paper leaks.
Chhatra Shibir central leaders, while taking part in the human chain programs in the different branches, said the government involved in a deep conspiracy to destroy the education system of the country. The question paper leaks in the ongoing SSC examination has attained a horrific level.

Without any fear of reprisal from the government, some have been posting open advertisements on social media with regards to leaked exam question papers in advance. Examinations are being held based upon the very leaked question paper every day since the start of the SSC examination. Even after evidence is being found, the government is not taking any effective action to stop these question paper leaks. Rather, the education minister of the country has been shamelessly speaking on the issue to hide his failures. Already before, question paper leaks have been occurring starting
from the 1st class. It has been proved that government officials and party men are involved, along with the central leaders of Chhatra League, right from the beginning. But there has been no exemplary punishment. As a result, it has now turned into an epidemic. In order to save his skin, the Education Minister announced an award for catching those responsible for question paper leaks, which is nothing but a cunning move. In the mysterious failure of the government to stop the question leaks, the question among people is that despite the obvious evidence of the involvement the BCL leaders question paper leaks, why have they not been given exemplary punishment? Are people close to the minister related to the leaks? Does money obtained from these leaks go directly into the pocket of the minister or the big fish involved here? It is clear today to the nation that the government is moving towards implementing a horrific conspiracy to destroy the country by making  the next generation lacking in education.

The leaders said that such consecutive incidents of question leaks are unprecedented in the history of this country. Although previously there were a few cases of question papers leaked in different university admission examinations here and there, it has now become a terrible disease, which is nothing but the blueprint for producing a meritless generation. Through this, the whole nation, including the students, are being pushed towards an uncertain future. It is not possible to stop an immoral act like question leaks by a minister who is a self‐confessed corrupt official himself. He does not have the ability to hold such an important position such as the education minister. The nation does not want to see the destruction of the next generation. We immediately urge the Education Minister to accept his failure, corruption, irregularities and resign from his responsibilities. At the same time, we urge the government to take effective steps to stop all question‐leaks of the ongoing SSC examinations.

The Dhaka Metropolitan West Branch of Chhatrashibir has organized a human chain in protest against the questioning of all the cases including ongoing SSC examination and for exemplary punishment of the accused. At 11:00 am, activists of human chain in front of the central Dawah editor Shah Mahfuzul Haque in Mirpur Darussalam area held a human chain. At that time, various leaders and activists of the metropolis were present in the city including the president of city unit

Dhaka Metropolitan South Branch Dhaka Metropolitan South Branch has organized a human chain in protest against the question paper leaks in all the cases including ongoing SSC examinations and asked for exemplary punishment for the accused. The meeting was held in front of the Gandaria Railway Station under the leadership of the central publishing secretary Raziful Hassan Bappi and branch president Shafiul Alam at 8am. In addition, a large number of leaders and activists of the branch including Metropolitan Secretary

Masum Tarif attended the protest chain. Chittagong Metropolitan North Branch Chittagong Metropolitan North Branch of Chhatrashibir organized a human chain in protest against question paper leaks at all levels and demanded exemplary punishment for the accused. Central Literary Secretary Salauddin Ayoubi was present as the chief guest. During this, branch leaders Abdul Jabbar and secretary Shahriar, alongside different leaders and workers were present. Comilla metropolitan branch Shibir Comilla Branch organized a human chain in front of Comilla Board of Education gate demanding exemplary punishment for all the cases of question paper leaks, including the ongoing SSC examinations and asked for the simultaneous punishment of the accused. President of the organization Habibur Rahman Majumdar, and secretary Shahadat Hossain led the leadership. At that time, different level leaders and workers alongside organizing secretary Naimul Islam Shahadat were  present.

Rangpur Metropolitan Branch of Chhatra Shibir organized a human chain in protest against the Question leaks of all the cases including ongoing SSC examination and demanded for exemplary punishment for the accused. At 10 am, leaders and activists of human chain in the city led by branch president Samiul Islam, branch secretary Ashikur Rahman and several other leaders were present in the demonstration.

Chittagong Metropolitan South Branch of Chhatra Shibir has organized a human chain in protest against the question leaks of all the cases including ongoing SSC examination and demanded for exemplary punishment for the accused. At 8:00 am, leaders and activists of the district unit led by President Hasan Abdullah Loudi carried out human chain in Pahartoli area. In this event, a large number of activists including the branch secretary Imranul Haque took part.

Chapainawabganj city branch of Chhatra Shibir organized a human chain in protest against the question leaks of all the cases including ongoing SSC examination and demanded for exemplary punishment of the accused. At 10 am, a human chain was held under the leadership of the branch president Enayet Ullah.

Bogra city branch of Chhatra Shibir made a huge human chain in the city with the same demands. The human chain was held at Multidali in the city under the leadership of the branch president Hassan Tariq at 9:00 am. The Secretary of the branch Titas Ahmad also took part in the meeting alongside other leaders.