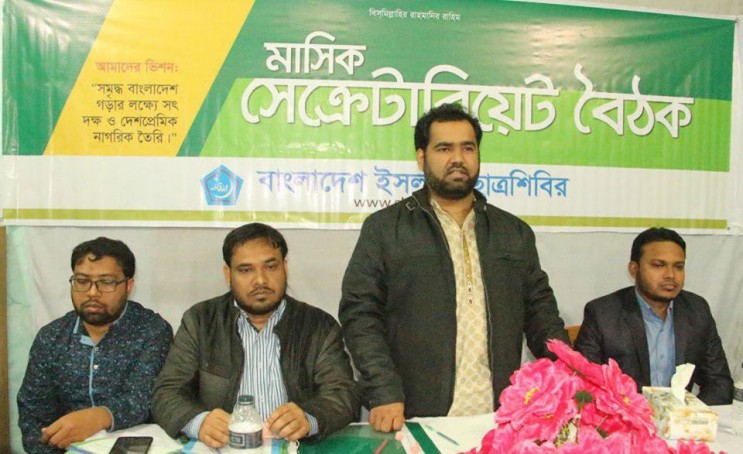 Yasin Arafat, the central president of Bangladesh Islami Chhatrashibir, said that Chhatrashibir started the journey with the aim of creating skilled and patriotic leadership towards building a prosperous nation. It has come a long way on this journey today. Huge conspiracies have been hatched from several quarters to curb this move. But no plot was successful. Chhatrashibir has become a symbol of the hope of the nation through constructive work.

He said this at a Secretariat meeting of Shibir in an auditorium at the capital. The function was also attended by Secretary General Mobarak Hossain, Central Dawah Secretary Shah Md. Mahfuzul Haque, Literature Secretary Salahuddin Ayyubi and other central leaders were present.

The Shibir president said, the establishment of Chhatra Shibir was an inevitable demand of that time. The entire background, including the socio-economic, religious, political, cultural, country of the country, made the debut of this organization unavoidable. In the face of unjust politics, at a time when the education system was preaching misguidance, when the student community was being misguided, and the anti-Islamic powers were spreading their poisonous ideas, on February 6, 1977, Shibir was founded at the Central Jami Mosque of Dhaka University. Since its establishment, Chhatra Shibir has created a new trend in student politics. The caravan has been playing a strong role in the development and guidance of student members of Chhatra Shibir outside the arena of traditional student politics. The organization has been able to assure the nation through steadfastness and constructive activities to protect the country and Islam. But although Shibir has been a symbol of hope for Islamic and patriotic people of the nation, it has become a thorn in the eyes of the forces of evil. The totalitarian oppression carried out upon Shibir as a student organization is unprecedented. We have being victimized by killings, disappearances, torture, conspiracies, propaganda, and information terrorism at every turn of pur journey. The state power has utilized the most cruel means to destroy the organization. But Chhatra Shibir has been facing all the oppressive conspiracies against it through patience, discretion and constructive activities. The abuses of cancellation could not deviate us even one hair from our target purpose. Rather, it has made us stronger and more focused. The students of the country are directly witnessing the lively activities of Chhatra Shibir. As a result, the use of state-of-the-art modern methods of oppression have not been able to subdue us and our message. Rather, each of their attacks has only increased the credibility of Shibir amongst the student community.

He said that through the establishment of the examples of highest sacrifice for the past 41 years, Chhatrashibir has been steadily progressing towards its goal. Inshallah, the constructive ideology of Chhatra Shibir will continue in the formation of leadership in the light of the noble ideals of Islam. We will never bow to wrong-doing, but we are determined to go ahead against all our adversity with the utmost patience and bravery.

Hussain Vai Malyesia, [05.02.18 23:46]
[In reply to স্বপ্নের ঘুড়ি]
resident called upon all the leaders and activists of Shibir to make the program a success.