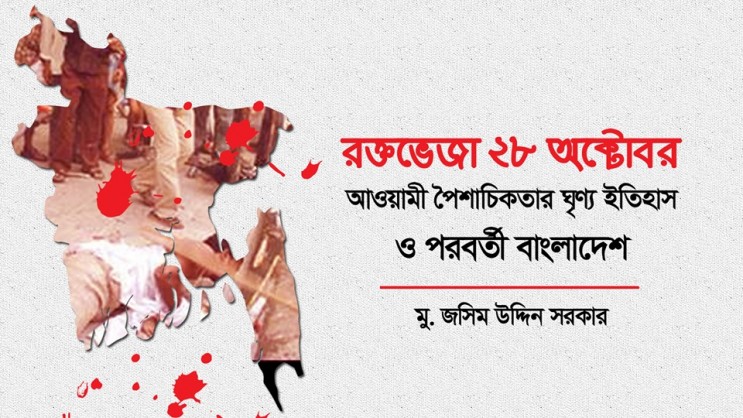 If the list of the worst crimes against humanity in the political history of Bangladesh is chalked out, the horrific crimes and brutality of Awami terror on the bloody 28 October history will be on top of it. The brutality and violence of the 14-party Awami League led armed cadres at the end of the rule of the four-party alliance government gave birth to this blood soaked history in the annals of national memory. The violence carried out by the Awami League-led 14-party alliance on that day against Jamaat-e-Islami and Islami Chhatra Shibir activists was unprecedented in history.

What happened on that day:
In 2006, the 28th of October was the four-party alliance's alliance day of transfer of power. As previously announced, a peaceful rally was going on at the northern gate of Dhaka's Baitul Mukarram. Suddenly, the Awami beasts brutally attacked the peaceful gathering and with oar-paddles and firearms and killed six meritorious persons mercilessly, including Shipon, Mujahid. Many people are injured. The killer beasts were not just content with killing, but also found the time to dance over the dead body of the martyrs in a fashion that exceeded the atrocities of violent creatures. Such terrorism of theirs is spreading across the country mainly on the instructions of the party leader and current illegal government head, Prime Minister Sheikh Hasina.

Many people think that at that time of the the real purpose of the Awami League's violence was a demonstration of power. The then Awami League president instructed to block the streets on the 28th of February throughout the country, including in Dhaka, with the oars and paddles. After the announcement, Awami terrorists from across the country gathered in Dhaka with oars-logs and weapons. The administration imposed Section 144 on both the BNP and the Awami League in Dhaka's Purana Paltan. As a result, the BNP organized a rally in Nayapaltan and Jamat-e-Islami organized a peaceful rally in the north gate of Baitul Mukarram. From the morning the work was going on for the construction of the stage of the meeting. Suddenly at 11 am, Awami League's logi-boitha army and gunmen attacked Jamaat's rally venue. Many of the leaders and activists of Jamaat and Shibir were wounded severely due to their demonic attacks. Their attack was well-planned and fearsome. They simultaneously attacked from points at Bijoyangar, Topkhana Road and the Paltan corner from Muktangan. At one stage, Awami terrorists entered the Paltan sidelanes and beat the innocent leaders and activists of Jamaat-Shibir. Starting from that barbarism at the Paltan corner, they attacked the JI-Shibir activists throughout the day. Jamaat and Shibir activists were wounded one by one in these logi-boitha and armed attacks.

They brutally killed Shibir leader Mujahidul Islam and Shipon after hitting them with sticks. Activist Jasim Uddin was killed in a cruel manner by striking him one after the other with huge sticks. After his death was confirmed, they started to dance and cheered on his body.

They wanted to set fire at Jamaat's meeting. After the first attack, they started taking further preparations. Arriving climbing to the rooftop of the neighboring building, they took positions with hand bombs and various types of firearms. At the end of the procession, when the statement of Maulana Nizami began, they again attacked in a pre-planned manner. On one hand, there was a shower of bombs from the rooftops of buildings. On the other hand, the logi-boitha army started moving towards the rally amidst shooting and firing from the Paltan junction. During this time, the activists of Jamaat and Shibir created human shields. Jamaat activist Habibur Rahman and Jurain Jamaat activist Jasim Uddin fell in the streets on the streets after being injured by gunfire on their heads from the Awami armed cadres. Six activists of Jamaat and Shibir were martyred and more than 100 injured on that day. The current young generation did not see the genocide in Hirosima-Nagasaki, or the brutality of any autocracy, but they saw the horrific scenes of October 28th. Many people around the world saw the unfolding events with tears in their eyes on that day. The world was shocked, the world humanity was dumbfounded.

This violence on the orders of Sheikh Hasina in such an objectionable manner is a criminal offense. Under Section 3 (37) of the General Clauses Act, 1897, it has been said that “Offense means any act of time being enforceable,” which is a penal offense. If some innocent people can be hanged in the false cases of war crimes before 45 years, then events on October 28, which happened in public view, will be enough to prosecute those responsible.

October 28 and today's reality:
The darkness of clouds in the sky of Bangladesh begins with the beginning of October 28, 2006. The 1/11 government that came to the guise of the emergency government took the country towards ruin. Awami League came to power in the elections of 29 December 2009 to be freed from the legacy of the 1/11 govt. The desire of the public was democracy and the freedom of the public. But after coming to power, the worst black chapter in the history of civil administration took place. According to the inaction of the government or according to some others, through its active meddling, 57 army officers were killed in the Pilkhana tragedy. Awami government could not give any viable answer to this incident till date. Through these killings, it was originally planned to sell the sovereignty of the country to maintain their own power.

This conspiracy was exposed to the nation by the Tipaimukh Dam incident, withdrawal of army from the CHT, and the various types of secret agreements by the govt. Before coming to power, the Awami League government promised to provide rice to the people at a rate of 10 taka and give jobs to every household during the elections. But in continuation of the looting of the past, hundreds of millions are being looted from the people through the Padma Bridge, Hallmark, Destiny, Quick Rental Power Projects and the common stock market through the stock market. Through looting, many people in government have changed their fortune. Extortion, looting and murder by the government through party and state terrorism has crossed the limits of the patience of the general public. Human rights situation has severely deteriorated due to unwarranted use of state power to suppress opposition. Today Baskal's footsteps are everywhere. There was an opportunity for the Awami League to reform themselves, as they had long been out of power and they could have stood by human values. But like 72 to 75, they again began killing and disappearing people in earnest after coming to power. Brigadier Azmi, Barrister Arman, Zakir, Mukaddas, Waliullah, and Ilias Ali, among others have not come back even today. In the name of the trial of the so-called war crimes trial, the renowned Islamic scholars and Jamaat leaders have been jailed with false cases. 45 years after the issue of independence, this solved issue was re-opened and was brought to the fore and the innocent Jamaat leaders were executed. The country's illegal and anti-Islamic government has taken position against the scholars of the country, beard-cap and mosque-madrasa.

Through the incidents of October 28th, the power-grabber government has completed all arrangements to put the final nail in the coffin of humanity through the killing, abduction and arrest of meritorious youth by the law enforcement agencies one after the other. Awami League law enforcers have repeatedly crossed the line for inhumanity. Jamaat-Shibir and anti-government activists have been brutally killed in alleged crossfire. In lieu of the Faruk murder, Rajshahi activist and only child Shaheed Hafizur Rahman was shot brutally in the head and killed, the eyes of many activists of Shibir were taken out. Shahid Shahidul Islam was killed brutally after his arrest, and did not even have the chance to look at his baby daughter Sadia's face. Hafizur Rahman, who was suffering from thalassemia, was arrested from home, denied treatment and was murdered. Jatiyatabadi Chhatra Dal leader Jony was killed by police, even though his wife was pregnant with child. The brutal behavior of the law enforcement agencies of Awami League has surprassed the brutality of Hitler's Nazi forces.

Firm Leadership is the symbol of our Confidence:
During the Jamaat rally on October 28, senior Awami League leaders Tofail, Abdur Razzak, Iqbal, Haji Selim led the attacks on the rally when Shaheed Ameer-e-Jamaat Maulana Motiur Rahman Nizami began his speech. Standing amidst the ruthless ongoing massacre, he did not even give provocative speeches at the time. He said we will respond to their injuries through the ballot. His speech has been widely acclaimed across the country. Similarly Syed Abul A'la Moududi, the Ameer of Pakistan's Jamaat, was delivering a speech when terrorists attacked the Nikhil Pakistan Jamaat conference in Lahore in October 1963. When the terrorists were shooting at him, he was repeatedly beig told that “Maulana sit down, sit down”. He replied earnestly, 'If I sit down, who will stand there?' It is like the endless bravery of the Sahaba (R), their integrity and the wonderful phenomena of character. Hadrat Ali (R) avoided a personal fight in the battlefield for the sake of Allah because of his opponent spitting on him. What greater example of kindness, and greatness is there than the above.

The biggest asset of our martyrs:
They have created the straightforward way of courage. The head of Shaheed Mujahid, who prostrated himself to the heart of the Prophet, was crushed. The mouth of Hafez Shipan, which used to recite the words of the 30 parts of the Qur'an, has been shut. Allah says, وَمَكَرُواْ وَمَكَرَ ه اللُّ وَ ه اللُّ خَيْرُ الْمَاكِرِينَ “And the unbelievers plotted, and Allah also has made a plan. Allah is the best of planners”. (Sura Imran 3: 54). In the past, Allah has destroyed the conspiracy of the conspirators and given victory to the believers; in the same way, the road on which the blood of the martyrs of the Shaheedi caravan has been spilt, those of Mujahid and Shipon and their descendants, their followers will sing the slogans of victory in the same road insha Allah. The evil God-hating oppressor’s throne will be destroyed by a group of brave warriors, who will create a garden of peace and joy. They sing as always,

“We will never fear,
Neither Greed nor threats,
Faith is our guide,
In death we are Shaheed, in life we are Gazi”