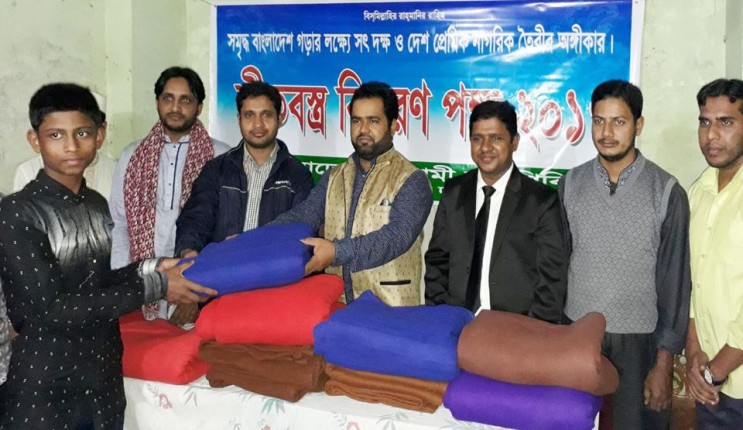 The Central President of Bangladesh Islami Chhatra Shibir said, the helpless cold-affected people are part of our society. There is no scope to ignore them. The government will have to fulfill the main responsibility of helping the helpless affected. Along with this, the wealthy people of the society must also stand beside them. It is important for the government and the people of the society to come forward to the help of the cold people by responding to the cold related humanitarian crisis.

He said this as the chief guest as part of the winter distribution program while distributing warm clothes among the cold-hit students, which was organised by Chhatra Shibir Dhaka Metropolitan South branch. The program was presided over by the president of the branch, Shafiul Alam, and secretary Masum Prachin was also present on the occasion. Central Law Secretary Riaz Uddin, former Central Madrasa secretary Sadek Billah, and various leaders of the branch were also present.

The Shibir president said, in winter, poor people suffer from inhuman conditions in several areas of the country. People of different parts of the country have been affected by the cold, fog and even rain. Due to the lack of warm clothes, many poor people suffer and remain unhappy, which is the same picture almost every year. It is necessary for the philantropists and the wealthy to extend their hands to help the poor people who affected by sufficiently providing warm clothes and standing beside them as well-wishers. It is the duty of humanity to help and serve people in a non selfish manner. For this, the Prophet (PBUH) has spoken of the reward of the next life. The Prophet (SAW) said, “If a Muslim gives clothes to a Muslim, Allah will give him the clothes of Paradise. If he is hungry, then Allah will feed him the delicious fruits of Paradise. If a Muslim serves water to another while the latter is thirsty, then Allah will feed him holy water from the sealed vessel of Paradise” (Sunan Abu Dawud).

He said that, in the winter when the wealthy sleep warm and comfortably, the poor cold affected people wait for help from the government and the wealthy. They stay with hope that the rich people of the society will stand beside them and save them from the extreme hardships of winter. The number of rich people in Bangladesh is many. But even then, a large group of people in the country suffer during the winter every year. The country was not supposed to have such huge walls of divisions between the rich and poor. Only due to the lack of governance by the laws of God, the vast majority of the population has remained poor. It is as if there is no end to the misery of these poor helpless people in winter. By extending the hand of cooperation by the well-off people of the society, including the rich, to the poor people, it is possible to reduce the problem.

The Shibir President further said, it is every person's duty to help the victims, by standing beside them. Since the establishment of Chhatra Shibir, it has tried to stay beside the helpless poor as per the best possible manner. Keeping in mind the wintery cold, the winter clothes distribution program is being organized with their cooperation. He instructed every member of the organisation to distribute at least one warm clothing amongst the cold-affected people. Even though it is not enough, Chhatra Shibir has tried to stand beside the poor people from the responsibility towards the society, and this effort will continue, Insha Allah. We are calling upon all the people of the society including the Chhatra Shibir activists and the government to come forward to help the helpless, cold-affected people of the affected areas in the country.