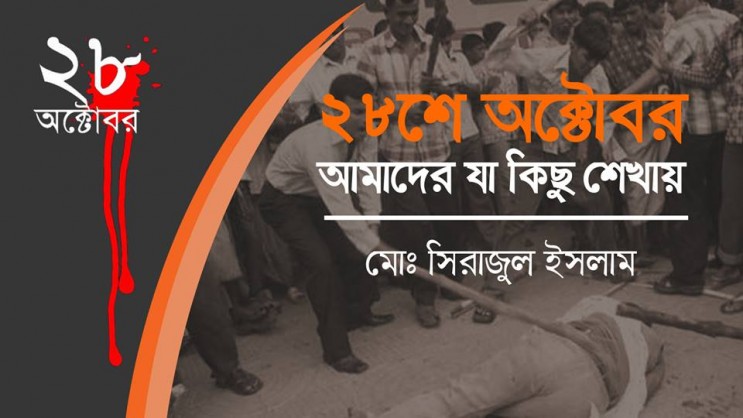 What October 28th has taught us

The meeting of the closing assembly for Jamaat-e-Islami was very urgent because it was the last day of the four-party alliance government's tenure in October 2006. And that was the goal of organizing the rally at the north gate of the National Mosque, that place that is emotional for us, our beloved address.

Historically, Jamaat-e-Islami has always gathered in this place. In continuity of that trend, this same place was also chosen for organizing this rally. In the light of the announcement of their leader, the Awami League-led opposition alliance attacked according to a pre-planned move. Not just the paddle and oar, but their constant companion firearms were also present as an expression of their violent behavior. That day the Awami League brought its workers to Dhaka from across the country. And their hired gangsters were also there. In face of their pre-planned attack, activists of Jamaat-e-Islami and Islami Chhatrashibir have laid down their lives, they have opposed the stance of the forces of evil. The brave mujahids had stood together one alongside the other in their effort to accpet the challenge of standing up to the Awami League hooligans brought from all over the country. They have gone forward after seeing their martyred brothers, they did not turn back. Those people who have made a promise to sacrifice land and property in the name of Allah, they had gone on the path devoted to God. And Allah has accepted from among them martyrs whom He wanted, and gazi, or victorious from whom He wanted to. The courage of the martyr and the gazi of that day always teaches us many things.

Discussions on 28th October are discussed in many contexts. I will try to highlight the small part of the lessons we can take from the efforts of the workers of the Islamic movement of that day here,

Not a majority, but faith is the real power
In that context, it was very important to successfully carry out the program declared by Jamaat-e-Islami. The Jamaat-e-Islami and the student wing of Shibir did not have too many workers to counter the attack that was conspired by the Awami League. Many people were staying at their village homes because of this program being right after the Eid. The program was organized with the supporters present in Dhaka. And on that day, these few mujahids stood against the violent hyenas, and became steadfast, unrelenting and strong, to whom the love of life held meaning no more. Rather they did not hesitate to set their chests in front of the guns for the movement. To save the dignity of the movement, they thought it necessary to sacrifice their lives in the way of Allah. It may be that Allah accepted from them their faith and granted them the taufiq to continue and successfully finish the program.

Our tradition of steadfastness and perseverance is our tradition
The main program of Jamaat was after noon. Preparation for the program was there since the morning. And it was at that time that the oar-paddle holders attacked. They became busy in showing violence and brute force. They wanted to capture the stage to the north gate of Baitul Mokarram through their procession and destroy the peaceful and orderly arrangement. At that time, due to this attack, Jamaat-e-Islami could have cancelled their programs, but it was not done. Because it is not the lesson of the Islamic movement to be defeated by injustice. The tradition and history of the Islamic movement is to stand against oppression and fly the flag of victory. The Islamic movement did not fall behind that day because standing by that rule. Workers also showed steadfast and firm determination, did not accept the wrong demands of the evil, and defeated their evil motivation.

Besides the construction of the field workers, the workers in the house were also created at a similar pace Alongside the field workers, the mothers who created them were also trained alhamdulillah. When the people of the Islamic movement came out at the call of the movement out of the house towards Baitul Mukarram, not only did they come out, but they also brought with them the prayers of mothers, their affection and love. Not only were the brave warriors created and trained, but the mothers had built up themselves as the 'mothers of brave warriors' since a long time. Maybe they couldn't understand it before martyrdom, but after the martyrdom of the child, the companions of the martyrs were able to identify the mothers of the martyrs. The strong voices of the mothers proved that they were ready to be the mothers of martyrs. They raised their beloved children to be devoted to the satisfaction of their beloved lord Allah the Almighty. Their children gave their lives and left these mothers as mothers of 'martyrs'. There is nothing different from this feeling when one listens to the words of the mothers of Shaheed Mujahid, Shaheed Shipon, and Shaheed Masum among others.

The leaders have to control their emotions
As far as I remember, the then general secretary of Shibir, Zahidur Rahman, in his memoirs of 28 October had written that at one point of time, the erstwhile Jamaat-e-Islami general secretary Shahid Ali Ahsan Mohammad Mujahid said to him, "The leaders have to keep their heads cool, their emotions should be controlled." When news of martyrdom was coming from all over the place , and it was difficult to control oneself, the words of the senior leader helped him a lot.

Keeping a cool head is the primary duty of leaders
Not only did the directive tos tay cool come from the directive of the Secretary General of Jamaat-e-Islami. At the same time, it is quite surprising to hear the statement of the cool headed amir-e-jamaat Shahid Maulana Matiur Rahman Nizami's speech, whose record is still found in front of the opposition that they were facing that day. The statement of the cool head actually gave the workers a direction about the mood of the movement required that day, which will be an example and direction for us through the ages. There is a special opportunity to learn from here. And it is that its important to keep an eye on far-reaching results alongside short term results. This statement of Maulana later proved as to what extent the Islamic movement is orderly, systematic and civilized in response to cowardice and violence of its attackers.

Unity of manpower of the Islamic Movement
On that day, the people of the Islamic movement protested together with their shoulders against each other, and formed a very strong wall together. And the people of the Islamic movement got the guidance to be together with each other to be united like a lead wall, from Allah's command itself. Allah SWT has said in verse 4 of Surah As-Saff in the Qur'an –
"Surely Allah loves those who fight in the way in their rows in the same way as a straight wall." (Surah As-Saff 4)
The heartwrenching incident that happened on that day, its shadow fell all over the country. The manpower throughout the country felt the pain. It was as if the coffins of the their martyr comrades were being carried by the whole country. If was as if the hearts were crying together and praying for the wounded, praying for the martyrs. This is a reflection of a hadith narrated by the Prophet, as follows

The Prophet (peace be upon him) has declared, "One believer is the brother of another believer." (Mishkat)
According to another Hadith, narrated by Noman bin Bashir (R.A.), he said, the Messenger of Allah (SAW) said, you will see the believers as a body in their mutual sympathy and friendship and kindness for each other. When one or part of the body is in pain, then all the organs of the body share the pain through waking through the night and fever. (Bukhari and Muslim)

The manpower of the Islamic movement should be aware of the opponent's conspiracies
We were surprised to see the ugly nature of the action by the Awami League and left-wing organizations on that day. On that day they showed their violent character to the whole world, as well as the character of their dark self on that day. They killed Jamaat activist Shahid Habibur Rahman and made the drama of lying upon the dead body. Not only did they claim Shaheed Habibur Rahman to be their worker, but one of the Awami League people, who spoke in the media claiming that martyr Habibur Rahman was his own child, was set up to strengthen this false drama. A person whose child was just recently killed cold not have spoken in the manner that that man had spoken. Anyone who sees his interview will suspect as o whether his son had been killed at all! Later, after confirmation of the identity, it had been proved that there was no relation of that man with Shahid Habibur Rahman, the latter being a devoted activist of Jamaat-e-Islami. From here it is seen that anti-Islamic opponents can do such acts; they can also lie, in manners which cannot be imagined by truth-lovers in any way in the real world. Therefore, it is necessary for the activists of Islamist movement always be aware of the conspiracy of Islam's enemies. Without keeping relevant knowledge and ideas about such people, it is difficult to determine the direction of movement.