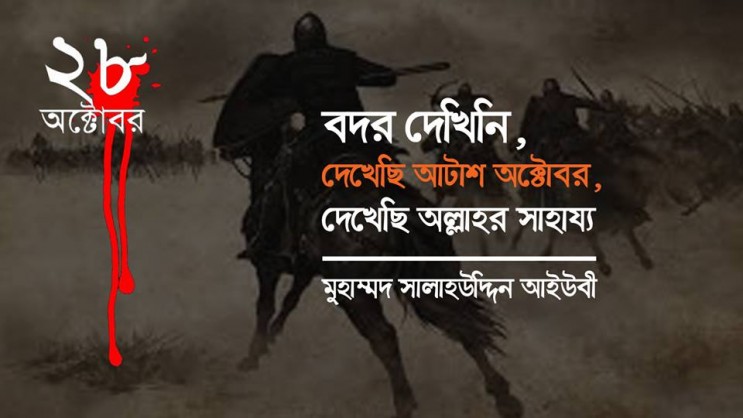 I did not see Badr, I saw the 28th of October, I saw Allah's help

October was an unequal ruthless attack on October. Hundreds of thousands of armed Awami league terrorists, who were gathered from across the country, pounced upon a small number of unarmed activists of Jamaat-Shibir. Accordıng to sources, terrorists were also imported from India, because the incident was premeditated. Maulana Matiur Rahman Nizami presented in his prison book in memory of 28th October that it was preplanned. He wrote "Some days back, Canadian lawyer Mr. Sloan, while travelling on his way to Canada after touring Bangladesh, told journalists in New York, that the "minus two formula"was a much earlier and scheduled plan, and that 28th of October was very much preplanned. An MP and a journalist told this to Moudud Shaheb in 2005. "

As if Paltan became Madina
Just like the unbelievers of Makkah came to attack Al-Madinah, the Awami League, with the help of terrorists gathered from across the country, came to Paltan. The way the people of Medina had helped to protect the believers, the Paltan people extended their hands in the same way as they helped on the 5th of May. When we were helpless against the attack of the tearshells, they came forward with water, and when thousands of believers were roaming around hungry at night, then the Paltan people came forward to give food. On the 28th of October, although the hyenas surrounded us from the four sides, they did not dare to enter any lane of Paltan.

The Paltan tragedy was a one-sided attack
Like the preparations of the disbelievers in Badr, where the army of the unbelievers were more than the Muslims, in the same manner on 28th October, the successors of Abu Jahal, the Awami League and its terrorist army were many times more than the followers of the Islamic movement. The Jamaat assembly was a totally peaceful arrangement. Without any provocation, they started firing repeatedly on Jamaat's peaceful rally. Former CP Dr. Rezaul Karim Bhai, who was seriously injured by gunfire in front of me, Kamal bhai the then Dhaka Metropolitan President, was hit on the head by the bullets of the terrorists. When taking my friend (member) Nessar Uddin, who was injured in the eye, to the hospital, I saw Kamal bhai sitting on the wheel chair, his head clampedwith a cloth, his whole body awash in blood.

The hypocrites of Badr, Ohud were also at Paltan
We had the responsibility of security at the Paltan Corner. Terrorists armed with the paddle and oar came in several processions from 10 am onwards. The terrorists attacked former CP Manju Bhai, who was responsible for peace and security, without any reason. But the poliçe force standing beside the incident with their hands at their sides would equal the role of the hypocrites at Uhud. Later, I came to know that the police force did not play any role that day under the directive of the then Home Minister Babar, the head of the hypocrites. When the former central president Masud Bhai asked the police force to perform their duties, they instead changed their places to allow the terrorists to come. I met Babar in jail. He is today experiencing the fate of the hypocrites on this earth due to his greed..

I saw Allah's help
The victory of three hundred thirteen Sahabis against thousands of disbelievers was basically Allah's help. On the day of the Paltan tragedy, our leaders, including Maulana Motiur Rahman Nizami, were protected from the attacks of terrorists mainly due to Allah's help. On that day, the main target of the terrorists was the leaders, but Allah saved them with his unlimited power, the beloved leaders. My friend Nesar Uddin, who was injured, was trapped in the road while being taken to the hospital. Immediately I was worried that he needed urgent medical treatment sice he had been hurt around the eyes. I was surprised to see the CNG driver's immediate intelligence. He got release through courage from the terrorists at the time. I went to the hospital and saw horrific images. Thousands of injured brothers and only a few doctors. Everyone was busy with the treatment of another brother. A person was bleeding from his own body, but he kept on serving another. This scene reminds one of the events of the three companions near death in the desert. The Allah Almighty who saved the leadership in the wilderness of Badr and and on the streets on the 28th of October, will protect the leaders in the future, Insha Allah.