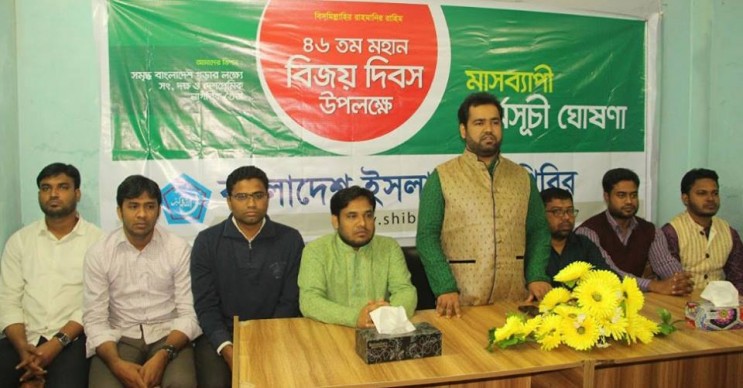 Shibir has declared a month-long program on the occasion of the 46th anniversary of the Great Victory Day.

Yasin Arafat, the central president of Bangladesh Islami Chhatra Shibir, said that the purpose of independence is to establish national unity, democracy, good governance and social justice. But even after 46 years of victory, we were unable to achieve that goal due to the politics of vengeance and partition. It has been proved today that the country's desired welfare is not possible without morality. Our goals are similar to this. We are determined to make the meaning of independence which has been gained in blood.

The Shibir president said the country was unable to progress despite having prosperity and potential. But in the contemporary period, most of the countries which have gained independence have gained their place in the list of prosperous countries. But the misfortune is ours as the opposite is being observed here. Those who have played a heroic role in the great liberation war, are now neglected and ignored today. Many of their successors are leading a pathetic life today. However, many are desperate to gain political advantage by capitalizing upon state power and spirit of liberation. The spirit of great victory was supposed to be the motivation to move forward. But sadly, liberation war has been used as a tool for the sake of self-interest. The pride of the nation, the liberation war, has been converted to party and personal resources. The liberation war that was used to unite the nation is now being used to divide it. Those today who claim to uphold the spirit of the liberation are themselves at whose hands it suffers the most.

He said that new dimensions are being added to the ongoing conspiracies in the country and abroad on the issue of independence and sovereignty. Militant attacks in the country, questionable government and police activities regarding dealing with militancy problems, arbitrary attacks on minorities in various places under the leadership of government party leaders, and Bangladesh's status in the world is getting worse due to anti-Bangladesh campaign. The reasons for which the people of the country have fought for independence - to establish national unity, democracy, good governance and social justice, have not being achieved. The basic rights of the people today are hostage to the will of the oppressors.

Shibir president said, due to the lack of an ideological political position, real victory has not been achieved even after so many years of independence. This political emptiness must be met by the ideals of Islamic values. The ethical-oriented ideological leadership efforts need to be intensified. For the sake of greater welfare of the country and the nation, everyone will have to work for greater national unity by avoiding the politics of vengeance, revenge and divisions. Everyone has to be vigilant in order to make the achievement of victory meaningful.