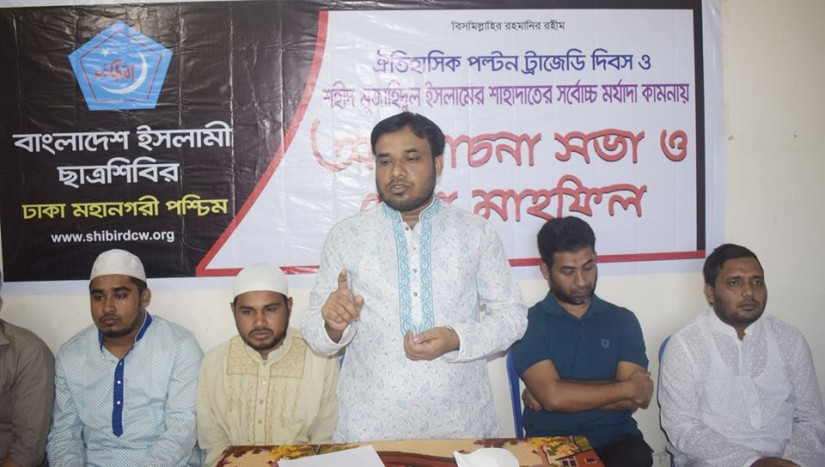 Bangladesh Islami Chhatra Shibir Secretary General Mobarak Hossain said that on October 28, 2006, the Awami League gave birth to vicious barbarity to eradicate the Islamic movement from the land of Bengal. They killed Jamaat-Shibir leaders and activists unjustly, but they did not succeed. The martyrs, through their martyrdom, foiled all their conspiracies. So the martyrs are among the topmost towers of our inspiration. The blood of the martyrs of 28th October will not go in vain.

He said this while addressing, as a chief guest, the meeting organized by the Dhaka City West Branch of Chhatra Shibir on the occasion of the historic Paltan Tragedy Day and prayer for Shaheed Mojahidul Islam's highest martyrdom. The meeting was presided over by branch president Dr. Mujahidul Islam, metropolitan organizing secretary Jubayer Hossain Rajan and leaders were present.

The Shibir Secretary General said that Awami League, on that day, had started a scandalous chapter in the history of the country's politics, a brutal, heart-breaking, and fierce chapter in human history. On that day, through public beating on the streets, Awami League has set an example of barbarity not only rare in Bangladesh, but also rare in world history. It is not possible for any political party to beat people to death, and then dance upon that dead body. Awami League has shown its manifest militant form through this incident. The terrorists who had taken the form of hyenas on that day, and martyred Mujahid, Shipon and the others, they are still active in the soil of Bangladesh. Bappaditya Basu, the self-styled murderer of October 28, is receiving state support instead of facing trial. As a result, they are committing further crimes with more enthusiasm. The people of the country think that the rise of crimes, including the secret killings today in Bangladesh, are the fruits of the culture of injustice. This support of the ruthless massacre and support for the killers is part of a deep and pragmatic conspiracy against our nation, the independence of the country, Islam and Islamic values. The nation will never forget this barbarity. The trial of this killing will take place in the very land of Bengal.

He said that after 28 October, they committed atrocities using the state and party power. The purpose is the same, and it is to eradicate the Islamic movement from the land of the nation. But time has come to prove that their plans have boomeranged. The places where the martyrs have fallen, are the places where the movement has become strong and dynamic. We want to clearly tell the murderers that the workers of the Islamic Movement cannot be removed from the path of justice even a bit. Rather the martyr is the highest tower of our inspiration. We are firmly committed to making any sacrifice to fulfill the dreams of the martyrs through the construction of Islamic society.