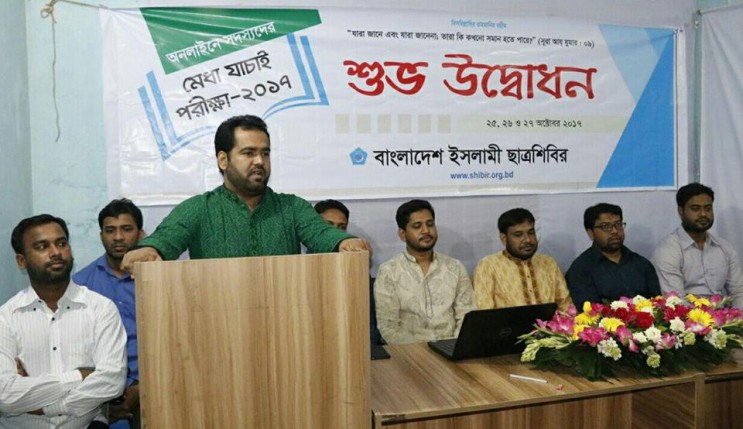 The merit verification of the members has started online

Yasin Arafat, the central president of Bangladesh Islami Chhatra Shibir, said that the questions regarding the country's education system were there in all aspects. There has been leaks for question papers in medical, university and other admission tests. The meritorious today are being denied in all aspects, which is a very bad disaster for the education system. The effect of this are being observed in national politics. Therefore, there is no substitute for developing intellectual discipline in student politics to change the quality of national politics.

He said this while addressing the inaugural session of the three-day online merit verification examination of the members throughout the country in an auditorium in the capital on Wednesday. Central HRD Secretary Jamshed Alam presided over the program while Secretary General Mobarak Hossain was present as the special guest. Others present included Central Office Secretary Sirajul Islam, Central Literary Secretary Shah Mohammad Mahfuzul Haque, and the Dawah secretary Mostafizur Rahman, among others, were present.

The Shibir president said, the government has failed to prevent question leaks. Despite knowing those involved in question leaks, no effective measures have been taken against them. The government seems to think its responsibilities have ended by showing people and simply arresting those it thinks are responsible. But in the admission test of important institutions like Dhaka University, there are examinations leaks in the admission test every year, whereby the involvement of important government institutions and that of BCL has been proved. That is why the government is not taking any effective action against them. Instead of the meritorious in the country, the unmeritorious are going forward, and are getting tickets to various universities through question leaks. Later, they are the ones sitting in important post in the government. As a result, the unmeritorious are the very ones going to the topmost positions of the country.

He said, at a time when questions about the standards of education and the quality of education have arisen, that was the time after which Shibir’s organizing such an examination was an an important message for student politics. He urged others to learn from Chhatra Shibir as to how a student organization could take part in the nurturing of merit. He believes that if the practice of nurturing merit increases in the internal environment of other student organizations and if they avoid immoral acts, then healthy politics will return. Those who are leading the country are trying to foil the proper environment of education in this country's educational institution by using muscle power instead of merit. At such a time, Chhatra Shibir organized a merit-based examination with the meritorious students of the country in order to create a new trend beyond the traditional trend of student politics.

He said that the government backed BCL is unable to accept or tolerate opposition voices in the universities at all. They are involved in torture and killings, and even do not hesitate to cut off the feet of opposition students in broad daylight. There is ganja cultivation in flower tops in Jahangirnagar university, and BCL leaders are involved in yaba business, rape, murder, drug trade and question leaks in different parts of the country. We believe that the very act of coming out of these misdeeds will change the quality of our national politics.

Since the establishment of Chhatra Shibir, its students have been working to bring quality change in politics. Although a wall of obstacles has been created in this direction, the student front will advance in the face of all the obstacles. He called upon the other student organizations to work for the enrichment of the students within, to enrich the country.