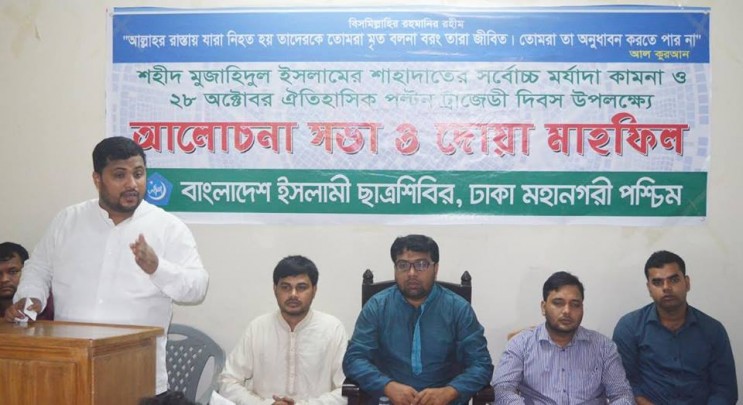 Atiqur Rahman, the Central President of Bangladesh Islami Chatra Shibir, said that the Awami League forces had unleashed fearsome cruelty in order to destroy and erase the Islamic movement from the soil of Bengal on the eve of 28 October, 2006. Their dreams, however, had not materialised, but boomeranged instead. The blood of the martyrs of 28 October, on the other hand, had strengthened the foundations of the Islamic movement.

He said this during his speech as the chief guest at a discussion and prayer program organised by Dhaka City West unit on the occasion of the historic Paltan tragedy Day on 28 October, 2006, where he prayed for martyr Mujahidul Islam such that he be granted the highest of rewards in Jannah. The meeting was presided over by unit President Sultan Mahmud and among those present was special guest Central Human Rights secretary Shah Mahfuzul Haque.
The Shibir president further said, 28 October was a shameful day in the political history of Bangladesh. On that day, the armed Awami hyenas attacked the Jamaat-Shibir leaders and activists to avail the irresponsible call by Sheikh Hasina to do so. Their vicious oar-paddle attacks left six people dead, including innocent meritorious martyred students Mujahid, Masum and Shipon among others. These vicious killings, followed by inhuman celebrations and dancing besides corpses by the Awami thugs left every person witnessing these scenes stupefied and the hearts of peaceful general people shuddering. The world at large witnessed the fearsome nature of dirty politics.

He said, a deep conspiracy had erupted to wipe out the legacy of the Islamic movement from that day onwards. But in the course of time, their dreams were proved to be false. Every drop of blood of the martyrs is speaking today. The general students are participating in the activities of Chhatra Shibir at a rate greater than any time in history ever. The journey of Chhatra Shibir has increasingly gained approval among the people of the nation. The people of the nation now expect the future architects of this nation to hail from Chhatra Shibir. This is the historical reality. The martyrs blood is never lost in vain, and it will not be lost in Bangladesh too.

He further said, it is shameful for a free sovereign country like Bangladesh to not serve justice for the victims of October 28 Paltan Tragedy. The killers are still safe and in good health, and continue to give lead during anti-Islam and anti-state conspiracies and activities. This is an example of the culture of impunity within Bangladesh. As a result, they have in fact widened the net of their nefarious activities. Their conspiracies have jeopardized the independence and sovereignty of the country today. The string of judicial murders of current Jamaat leaders and the killings of 28 October, 2006 are bound by the same thread. We will say that there will surely be the change in political power and players, but the the barbaric history of October 28 will never get lost. In the space of time, the murderers will have to face justice. The nation will never forget these barbarous hyenas and will never forgive them. 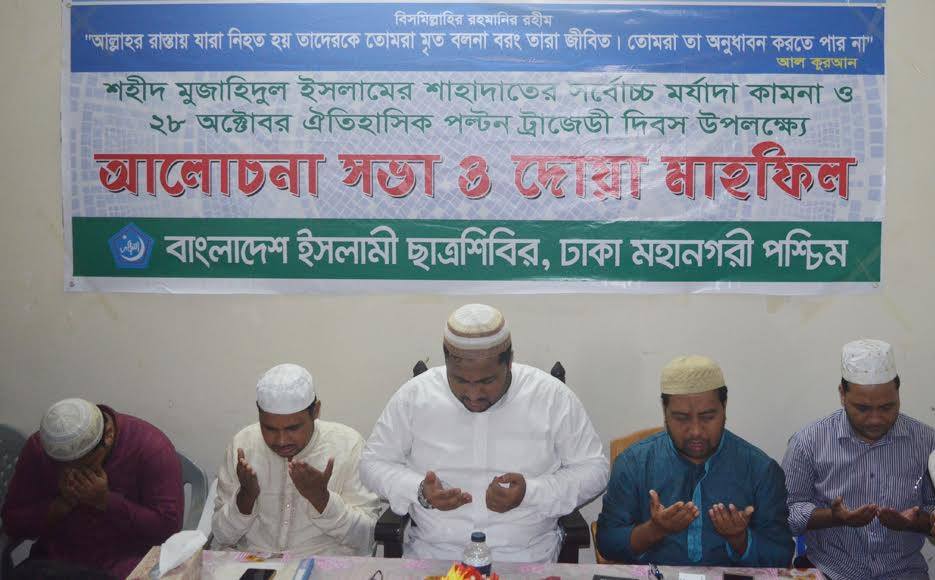