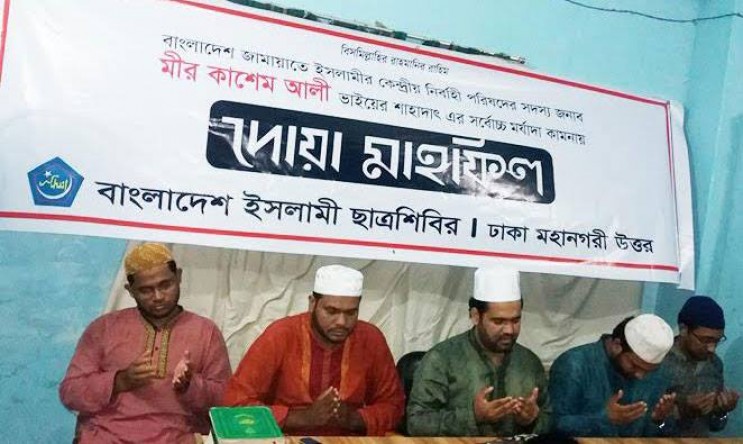 Yasin Arafat, the secretary of Bangladesh IslamiChhatraShibir, said that Mir Quasem Ali saw the vision of establishment of a welfare state. Not just content with vision, he also took steps to realize his vision of a welfare state. And due to this, the forces of evil became irked. Mir Quasem Ali was killed by the government in order to eradicate the Islamic movement of the country.

He said this at a meeting organized by Shibir Dhaka City North in the capital Dhaka as the chief guest and main speaker. It was organized to pray for the martyr and his attainment of highest place in Jannah. The meeting was presided over by Dhaka unit North President Jamil Mahmud and among those present was special guest Central Dawah Affairs secretary Anisur Rahman Bisshash.

The Secretary General further said, the name of Mir Quasem Ali will be associated with progress in Bangladesh forever. His work is highly influential in Islamic financial systems and welfare activities in Bangladesh. He was highly influential in establishing various Islamic and welfare oriented institutions such as Islamic financial institutions, mosques and madrassas. He was in a pioneer in bringing affordable healthcare to the poor and needy in Bangladesh. He was also active in providing employment opportunities to many in the society and played an important role in eradicating unemployment, which will never be forgotten by the people of this land.

He further said, Shaheed Mir Quasem Ali has been unjustly hanged due to alleged involvement with crimes against humanitythrough false charges. The prosecution had been unable to prove any of the charges against him. He had no association with the charges which had been brought against him and none of the documents brought against him bear his name. The prosecution documents against him themselves show that he was in Dhaka at the time of the alleged crimes, and not in Chittagong. Despite all this, his hanging through death sentence is an indication of the level of injustice.

The Secretary General further said, the government, due to its anti-islamic stance and hatred for political opponents, could not bear to stand his role and contribution in the Islamic movement and hence arranged for his execution. They want to stop the progress of the Islamic movement through this execution. However, that dream will not be realized. Through the execution of Mir Quasem Ali, the Islamic movement has progressed one step further. Today there are millions of youth who are ready to take up the work left behind by Mir Quasem Ali. These youth, infused with his spirit, will not just carry on working to realize the dream of Mir Quasem Ali, but will also exact revenge on his planned and unjust killing.