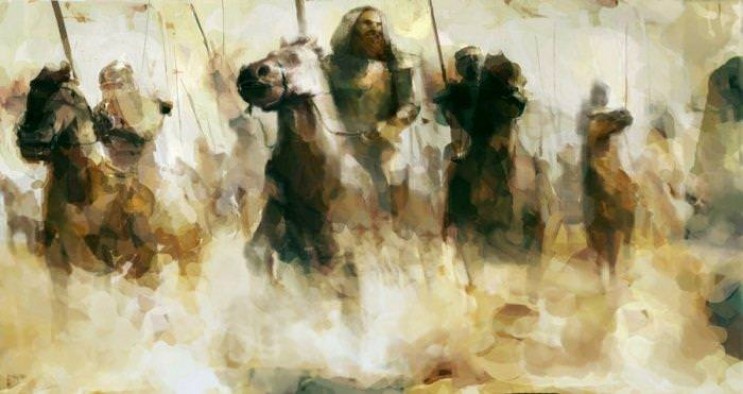 It’s the very first battle in the lifetime of Prophet Muhammad (PBUH) which took place on 17th Ramadan, 624 CE. The battle of Badr was fought in the place named “Badr” which was located about 80 miles away to the south-west from the City of Medina. The Muslims with only 313 soldiers headed by the Prophet Himself defeated the Quraish troops consisting of 1000 armed soldiers. In this battle, 14 Muslim soldiers got martyred (Shahid) while, on the other side, 70 enemy soldiers were killed.

2. Battle of Uhud:
In 625, the Quraish troops consisted of 3000 armed soldiers inclusive of over 300 on camel-back and 200 cavalry marched, under the leadership of Abu Sufiyan, towards the City of Medina and halted their camp in a place about 5 miles away to the west from Medina, namely “Uhud”. Meanwhile, Abdullah bin Ubai, accompanied by the Muslim-named betrayers, turned back with his three hundred followers while Muslim soldiers were marching towards Uhud. However, finally the battle of Uhud took place on March 23 625 CE and seven hundred Muslim soldiers fought against the Qurasih troops. In the first phase of the battle, Muslims were fighting well and they seemed to be winners but, unfortunately, the fifty Muslim archers who were ordered by Prophet Muhammad (PBUH) not to leave their position on Aynain until the battle becomes over left their place and started to collect enemy property. At that moment, one of Quraish youth leader Khalid bin Walid took the advantage and make a heavy crackdown on the Muslim soldiers from the back side and consequently took over the Muslim soldiers. In this battle Prophet Muhammad (PBUH) was severely injured and 73 Muslim soldiers got martyred while the enemy party lost their 23 soldiers.

3. Battle of khandak:
This battle was held on 31 March 627 CE. The Muslim troops consisted of 3000 soldiers and fought against combined force of the Quraish, Jews and Bedouin people who were about 10600 in number. Prophet Muhammad (PBUH) took the intelligent advice of digging canal around the city of Medina from his Companion Salman Farshi (R.) and, because of this canal dug, the enemies couldn’t attack and had no other choices but to go back to Mecca.

4. Treaty of Hudaibiyah:
It was in the year of 628 that Prophet Muhammad (PBUH) expressed His determination to visit Mecca. He accompanied by His 1400 followers (sahaba) started the journey towards Mecca and stopped in a place called Hudaibiyah getting a news from Budail bin Waraka that Quraish miscreants were preparing for battle. However, the Quraish sent Oraka bin masud to enter into a treaty and, in return, Hazrat Osman (R.) was sent to the Quraish. In the meantime, Hazrat Osman (R.) was late to return and a rumor was aired to the Muslims that he could have been killed by the Quraish people. In this situation, the Muslims took an oath not to return home without taking revenge of Osman’s murder. However the Quraish people, hearing such reaction of Muslims, immediately sent a delegation for signing a peace accord which is known as the treaty of Hudibayah. The important terms of the treaty are given below:

1. In 628 CE, Muslims can’t perform pilgrimage (Hajj), they must return to Medina without performing hajj.
2. All kinds of battles are prohibited for next ten years.
3. In the next year, Muslims would come and perform hajj but can stay in Mecca only for three days.
4. Muslims would bring caged swords with their waist only for the purpose of defense.
5. No Meccan would be given shelter by Muslims if he moves to Medina.
6. The Meccans would not be liable to return any resident of Medina in case anyone takes shelter in Mecca.
7. Both sides must obey the terms and conditions of the treaty.

The charter of Medina:
In the name of God, the Compassionate, the Merciful.

(1)This is a document from Muhammad, the prophet (governing the relations) between the believers and Muslims of Quraish and Yathrib, and those who followed them and joined them and labored with them.

(2)They are one community (Umma) exclusive of all the other humans.

(3)The Quraish emigrants according to their present custom shall pay the blood-wit within their number and shall redeem their prisoners with the kindness and justice common to believers.

(4-8) The ‘Banu Aous’ shall, according to their present custom, pay the blood-wit. Every section shall redeem its prisoners with the kindness and justice common to believers. The tribes of Banu Saida, Bani-Al-Harith, and Banu Jusham and Banu Al-Najjar will be treated likewise.

(12)(a) Believers shall not leave anyone destitute among them by not paying his redemption money or blood-wit in kindness.

(12)(b) A believer shall not take as an ally the freeman of another Muslim against him.

(13) The God-fearing believers shall be against the rebellious or him who seeks to spread injustice, or sin or animosity, or corruption between believers; the hand of every man shall be against him even if he be a son of one of them.

(15) God’s protection is one, the least of them may give protection to a stranger on their behalf. Believers are friends to one another to the exclusion of outsiders.

(16) To the Jews who follow us deserve help and equality. He shall not be wronged, nor shall his enemies be aided.

(17) The peace of the believers is indivisible. No separate peace shall be made when believers are fighting in the way of God. Conditions must be fair and equitable to all.

(18) In every foray, a rider must take another behind him.

(19) The believers must avenge the blood of one another shed in the way of God.

(20)(a) The God-fearing believers enjoy the best and most upright guidance.

(20)(b) No polytheist shall take the property of person of Quraish under his protection, nor shall he intervene against a believer.

(21) Whoever is convicted of killing a believer without good reason shall be subject to retaliation unless the next of kin is satisfied (with blood-money), and the believers shall be against him as one man, and they are bound to take action against him.

(22) It shall not be lawful to a believer who holds by what is in this document and believes in God and the last day to help an evil-doer or to shelter him. The curse of God and His anger on the day of resurrection will be upon him if he does, and neither repentance nor ransom will be received from him.

(23) Whenever you differ on a matter it must be referred to God and to Muhammad.

(24) The Jews shall contribute to the cost of war so long as they are fighting alongside the believers.

(25) The Jews of the B. ‘Auf are one community with the believers (the Jews have their religion and the Muslims have theirs), their freedmen and their persons except those who behave unjustly and sinfully, for they hurt but themselves and their families.

(26-35) The same applies to the Jews of the Banu-al-Najjar, Banu-al-Harith, Banu Sai ida, Banu Jusham, Banu al-Aus, Banu Tha'laba and the Jafna, a clan of the Tha‘laba, and Banu al-Shutayba. Loyalty is a protection against treachery. The freed men of Tha‘laba are as themselves. The close friends of the Jews are as themselves.

(36) None of them shall go out to war save the permission of Muhammad, but he shall not be prevented from taking revenge for a wound. He who slays a man without warning slays himself and his household, unless it be one who has wronged him, for God will accept that.

(37) The Jews must bear their expenses and the Muslims their expenses. Each must help the other against anyone who attacks the people of this document. They must seek mutual advice and consultation, and loyalty is a protection against treachery. A man is not liable for his ally’s misdeeds. The wronged must be helped.

(38) The Jews must pay with the believers so long as war lasts.

(39) Yathrib shall be a sanctuary for the people of this document.

(40) A stranger under protection shall be as his host doing no harm and committing no crime.

(41) A woman shall only be given protection with the consent of her family.

(42) If any dispute or controversy likely to cause trouble should arise it must be referred to God and to Muhammad the apostle of God. God accepts what is nearest to piety and goodness in this document.

(43) Quraish and their helpers shall not be given protection.

(44) The contracting parties are bound to help one another against any attack on Yathrib.

(45)(a) If they are called to make peace and maintain it they must do so; and if they make a similar demand on the Muslims it must be carried out except in the case of a holy war.

(45)(b) Every one shall have his portion from the side he belongs to.

(47) This deed will not protect the unjust and the sinners. The man who goes forth to fight and the man who stays at home in the city are safe unless he has been unjust and sinned. God is the protector of the good as well as God-fearing man and Muhammad is the apostle of God.

5. Battle of Khaibar:
This battle took place in May, 628 AD (during the month of Muharram). The Jews associated with the Bedouin tribe collected 4000 soldiers for the battle. On the other hand, Prophet Muhammad (PBUH) sent 1600 soldiers including 200 men infantry and the communication between Khaibar and the Banu Ghaftan was cut off. Thus, after a long time being blocked, the Jews surrendered finally. In this battle Hazrat Ali (R.) was accredited with the title “Asadullah” (Lion of Allah).

6. Battle of Mutah:
The battle of Mutah took place in 629 CE (8th Hijra, month of Jamadi-ul-Ula’). The reason behind this battle was to take revenge of the murder of Prophet’s ambassador Harish bin Umayyah. Prophet Muhammad (PBUH) sent a troop of 3000 soldiers in Mutah. The three famous chiefs of this battle Hazrat Jayed, Hazrat Zafar and Hazrat Abdullah were martyred. The Muslim army faced a big disaster against more than one lakh Roman army but finally Khalid bin Walid devastated the enemy soldiers and was eventually rewarded with the tile “Saifullah” (Allah’s Sword).

7. Battle of Hunain:
On 27th January, 630 AD (8th Hijra), the battle of hunain took place in a place called Hunain about three miles far from Mecca. The number of the Muslim soldiers was 12000 under the leadership of Khalid bin Walid and fought against 20000 Bedouin soldiers. The Muslims won the battle and imprisoned about 6000 enemy soldiers.

8. Tabuk expedition:
Tabuk expedition was the last expedition in the life of Prophet Muhammad (PBUH). During the month of November in 630 AD (9th Hijra, month of Razab), the Byzantine army numbering more than one lakh marched towards Madina. The total number of the Muslim soldiers was 30000 including 1000 infantry and 3000 cavalry. For the sake of this battle, Hazrat Abu Bakr donated all of his wealth and Hazrat Umar half of his wealth. Besides, Hazrat Osman, Hazrat Abdur Rahman ibn Awf and others donated noticeable amount of their wealth. The women donated their ornaments as well. Although, during this expedition, famine was in progress all over the country, the weather was too hot, the time to harvest crops was immediate and the arms were not enough but there was no alternative thereto since it was a question of existence for the Muslims. Fortunately the Roman army remembering their previous defeat to Muslims in the battle of Mutah could not dare to fight. As a result there was no actual occurrence of battle in this expedition.