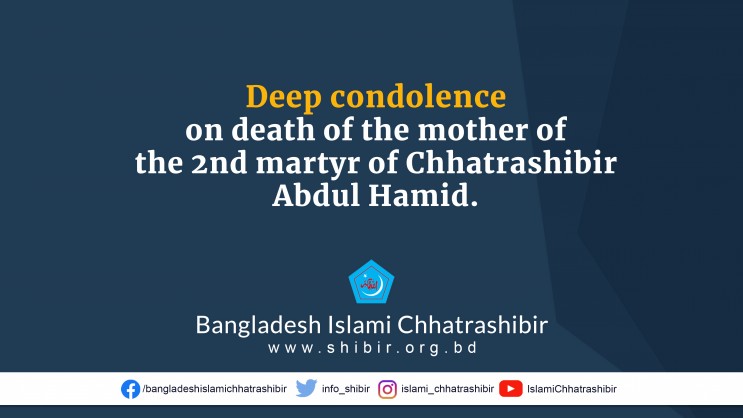 In a joint condolence message, Chhatrashibir Central President Salahuddin Ayoubi and Secretary General Rashedul Islam said that the mother of the second martyr of Islami Chhatrashibir, Abdul Hamid, died at her home on September 13 at 2.45 pm due to old age (innalillahi wa inna ilaihi raajioon). She was 105 years old at the time of her death.

At her death, Chhatrashibir lost another revered mother. She was a shining example of sacrifice for Islam. "I consider the activists of the Islamic Movement as my own sons. My request to them is that they make a sincere effort to finalize the unfinished work left by Abdul Hamid and make it successful," she said after the martyrdom of Abdul Hamid, her beloved son. Even after losing her beloved child, she remained steadfast in the path of religion. Her perseverance was a source of inspiration for us. She loved the leaders and workers of Chhatrashibir like her own child. Her prayers, love, expectations, encouragement and direction towards Chhatrashibir cannot be forgotten in any way. All the manpower of Chhatrashibir is mourning the loss of the mother of our beloved martyr.

We seek forgiveness for the soul of the deceased, pray that the Almighty grant her Jannatul Ferdous, and extend our deepest sympathies to the bereaved families.

It may be mentioned that Abdul Hamid, a meritorious student of the Arabic department of Rajshahi University, was martyred in a brutal attack by Chhatra Sangram Parishad terrorists on March 11, 1982 at a new fresher's reception ceremony organized by Chhatrashibir at Rajshahi University.