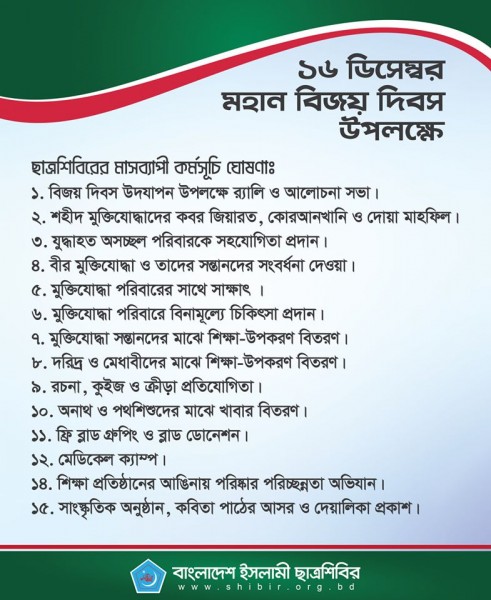 Announcing the program, the Shibir president said, that victory was achieved through the outstanding sacrifice and bloodshed of the heroic children of the nation. We attained an independent map called Bangladesh. But even after 48 years, the nation has been unable to truly enjoy the benefits of victory. The main objective of independence was the establishment of national unity, democracy, good governance, and social justice, which remains a dream today. Today, it has been proved that the desired welfare of the nation is not possible without patriotic moral leadership. Therefore, every activist of Chhatra Shibir has to make a relentless effort to make a Great Victory meaningful.

He said that 48 years is enough for the development of this country with sufficient natural and public resources. However, the progress of the country is disappointing. Many of the countries which had achieved independence alongside Bangladesh have today made themselves in the list of rich countries. But it is our bad luck. The nation is being forced to see the opposite image. Today, a large part of those who have played heroic roles in the Great War of Liberation, who have brought independent in exchange for heroic sacrifice, are being neglected today. Many of their descendants are living inhuman lives. But state power is busy capitalizing on the political benefits of 'chetona'. The great victory should have propelled the nation forward. But sadly, the liberation war is being used for achieving personal gains. The glory of the liberation war is being used for the sake of party prestige and personal wealth. The war of liberation which was supposed to unite the nation is being used to divide it. Those who today claim themselves to be the sole heirs of the War of Liberation are often the same who are violating the spirit of the War of Liberation. But Chhatra Shibir did not forget its duties. It has continued its efforts to make the national victory meaningful and to create honest, efficient and patriotic leadership to build a happy, prosperous and fair Bangladesh.

On December 16th this year, the central organization has adopted the 'Month long Victory Day Program' to build a prosperous Bangladesh, keeping the 47th Victory Day in sight. The president of Shibir declared the program, saying that everyone must be firmly committed to making this victory meaningful.