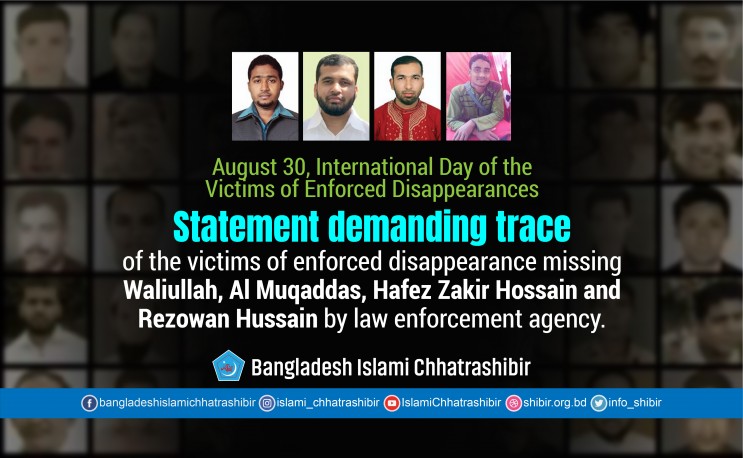 Bangladesh Islami Chhatrashibir has issued a statement demanding the search for Waliullah and Al Muqaddas, two meritorious student leaders of the Islamic University who went missing after being arrested by law enforcement, Hafez Zakir Hossain from Adabar area of the capital and Rezwan Hussain from Benapole in Jessore.

In a joint statement on the occasion of International Day of the Disappeared, Chhatrashibir Central President Salahuddin Ayoubi and Secretary General Rashedul Islam said the administration was adamant in its inhumane treatment of parents and relatives of the students who went missing after being arrested by law enforcement. On February 4, 2012, on their way to the campus in a Hanif Enterprise bus numbered 3750 going from Dhaka to Kushtia after a personal errand, Kushtia Islamic University Dawah and Islamic studies student and former Chhatrashibir cultural secretary of the university, Waliullah, and al-Muqaddas, a meritorious student of the fiqh department, were arrested by law enforcement forces at midnight from their bus at Nabinagar in Ashulia. But even after 9 long years, the law enforcement agencies have not acknowledged their arrest till date. On the other hand, on April 2, 2013, at 4.00 am, white-clad law enforcers arrested Hafiz Zakir Hossain from his house at 19/6 Tikkapara, Shyamoli Ring Road. Although 6 years have passed, the police have not given any information on his whereabouts. Similarly, Shibir activist Rezwan was arrested from Durgapur Bazar adjacent to Benapole Port on August 4, 2017 in the presence of SI Nur Alam of Benapole Port Police Station in front of a large number of people including shop owners and employees. Five years have passed since the arrest but the police have not given any information on his whereabouts either. Soon after their arrest, various police and administration offices were contacted but no information was given, although we had confirmed from various sources that they have been kept in the custody of the law enforcement agencies. Their relatives have repeatedly asked law enforcement agencies, courts and human rights organizations about their whereabouts. Regarding the disappearance of two meritorious students of the Islamic University, on February 15, 2012, a High Court bench comprising of Justice Abdul Awal and Justice Md. Ashraful Kamal summoned the IG of police and asked him to explain the status of the investigation into the disappearance of the two students. On the other hand, after years of strikes, human chains, processions, protests by national and international human rights organizations and the High Court's directives, the law enforcement agencies have not acknowledged or worked to trace the disappearance of the meritorious students. On the contrary, their parents and relatives have been harassed by the police while asking for information on the missing students. So far, the law enforcement agencies are trying to avoid the issue of disappearance. Enforced disappearance is also recognized as a crime against humanity under international law. That the citizens of an independent sovereign country are being subjected to such inhumane acts is anti-social, anti-humanitarian and anti-state. In an independent country, if innocent students have to go missing like this, and if they have to be harassed while trying to rescue them, then this freedom is meaningless. Besides, Brigadier General (retd) Aman Azmi and Mir Ahmed bin Qasim also went missing in the same manner.

The leaders further said that historically the Nazi forces had resorted to such barbaric methods for retaining state power and gaining political advantage by disappearing their opponents in a ruthless manner. Unfortunately, in the 21st century, this nation has been forced to see the same picture in this country. The United Nations drafted an international charter against enforced disappearances in mid-2006. This international charter came into force on 21 December 2010 and is being observed from 2011 on 30 August as International Day for the Disappeared. But despite repeated calls, the Bangladesh government has not yet signed this international charter. This proves that the politics of indiscriminate enforced disappearance is a reflection of the government's the Nazi attitude. Not only the 4 leaders and activists of Chhatrashibir but also many others including Brigadier General (retd) Aman Azmi and Mir Ahmed bin Qasim were the victims of state disappearance. No trace of many, including many students, were found after their arrest by law enforcement. The parents of the missing are still waiting for their children to return.

[In reply to ইবনে আহমদ]
Classmates are counting the hours in hopes of getting them back. It is unimaginable that the meritorious students and citizens of an independent sovereign country will disappear in the hands of the law enforcement agencies in such a manner. It cannot be a reflection of any civilized state system.

Chhatrashibir leaders said that like everyone else, Waliullah, Muqaddas, Zakir Hossain, Rezwan Hussain are the children of this country. They have a constitutional right to a fair trial. Neither the government nor the law enforcement agencies have the right to deprive them of their constitutional rights. However, the law enforcement ensured that the two meritorious students remain missing. Such horrific behavior cannot be imagined in any civilized society. Despite all this, we believe that Waliullah, Muqaddas, Zakir Hossain, Rezwan Hussain are safe with the law enforcement agencies. It is the responsibility of the state to find out where the missing persons are. They have to immediately give information of all the missing people including them. Similarly, a commission of inquiry should be formed to investigate every case of disappearance and bring those involved under the remit of the law. Otherwise, the identity of those involved in the disappearance is not unknown to the nation. The those involved in this inhumane act which is anti-social, anti-humanitarian and anti-state will have to pay the ultimate price for the cries and tears of the relatives who have gone missing.

The leaders called upon the administration to put an end to this inhumanity, give information of their whereabouts and release all the missing students and citizens, including the 4 Shibir missing leaders.