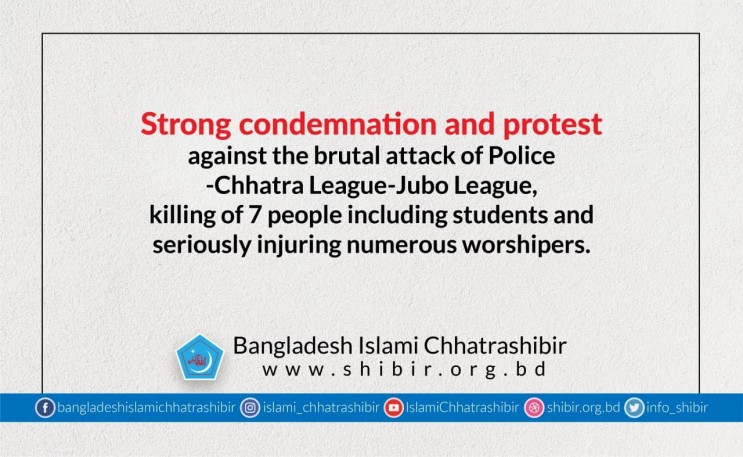 Strong condemnation and protest of police-BCL-Juboleague brutal attacks in Dhaka, Chittagong and Brahmanbaria leading to killing of 7 people including students and seriously injuring numerous worshipers

Bangladesh Islami Chhatrashibir has strongly condemned the brutal attacks of police-Chhatraleague-Juboleague in Dhaka, Chittagong and Brahmanbaria during the visit of Indian Prime Minister Narendra Modi to Bangladesh on the occasion of the 50th anniversary of its independence.

In a joint protest message, Salahuddin Ayoubi, central president of Islami Chhatrashibir, and Rashedul Islam, secretary general, said the brutality of the fascist illegitimate government has crossed all boundaries. The countrymen are stunned and outraged at the brutality of the police alongside the armed terrorists of Chhatraleague and Juboleague against the innocent worshipers. Speaking on any issue, holding a procession is a constitutional right of every citizen, party and organization. When worshipers from the Baitul Mokarram mosque began their peaceful protest in the capital, armed police unit in tandem with League terrorists attacked the unarmed innocent worshippers. Police entered the holy Baitul Mukarram Mosque with drug addicts and criminals with their shoes and fired shots and grenades at the worshipers. Two people were killed and many worshipers were seriously injured. On the other hand, at a protest in Chittagong against the police attack on worshippers at the capital, police opened fire on a demonstration in the Hathazari Madrasa premises, and brutally killed 4 people including 3 students. Similarly, one person was killed in Brahmanbaria. Numerous more worshipers have been injured in these barbaric acts, many of whom are currently in critical condition. We do not possess the language to condemn the brutality and inhumanity shown by the police in attacking and killing innocent worshipers with the help of terrorists in peaceful rallies. The police have carried out such barbaric killings before. This barbarism cannot be the work of any police but it is the work of a murder force. The police members behind each murder are known to the public.

The leaders said that it could not be the job of any civilized and responsible force to carry out attacks and killings upon peaceful demonstrators with the help of terrorists and drug addicts. When police have followed the party line, it has always encouraged terrorists and anti-Islamists to commit heinous acts. At the same time, the murderous policemen have also revealed the perverted nature of their hatred towards their own country and Islam. These attacks and killings have caused bloodshed in the heart of every Muslim. The police members and Awami terrorists involved in this planned attack and massacre must be brought to justice immediately.