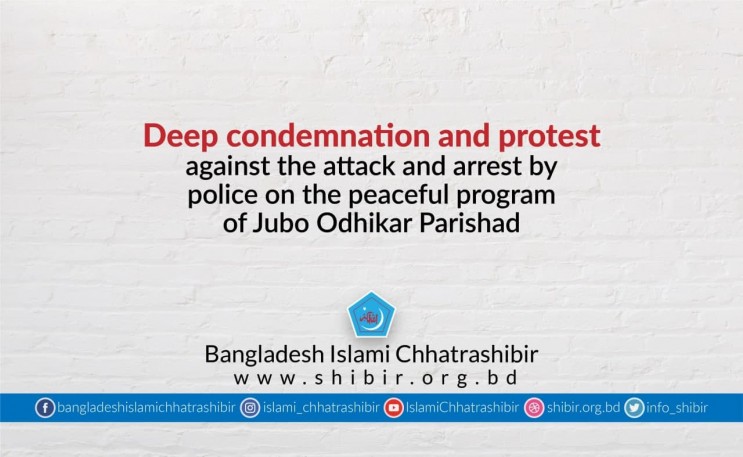 Bangladesh Islami Chhatrashibir has strongly condemned the police attack on the peaceful demonstration program of Jubo Odhikar Parishad in protest of Indian Prime Minister Narendra Modi's visit to Bangladesh on the occasion of the 50th anniversary of independence of Bangladesh.

In a joint protest message, Chhatrashibir central president Salahuddin Ayoubi and secretary general Rashedul Islam said the police, like the Chhatraleague terrorists, had attacked and arrested protesters who had been protesting in a peaceful manner against the visit of Indian Prime Minister Narendra Modi on the occasion of the 50 anniversary of independence. The police attacked the protesters frok behind without any provocation. Former VP of Dhaka University Central Students' Union (Daksu) Nurul Haque Nur was injured after being fired upon in the police attack. About fifty leaders and activists have been shot at and injured. About 30 people including Maulana Rafiqul Islam Madani have been arrested. After arresting the protesters, the police even threw them on the street and beat them. Maulana Rafiqul Islam Madani has been arrested while being subject to abuse, which has gone viral on social media. However, the police were forced to release him later.

It is the legal and constitutional right of every citizen, party and organization to hold peaceful protests in the country. But the police are illegally depriving the people of their rights in the guise of law. Due to such unprincipled role of the police, people consider them the same as the Chhatraleague terrorists. The police are always taking a stand against the people while playing a serving the whims of a political party. The countrymen think that the police are playing the role of the party's battalion in police uniform.

The leaders said that those who stand against the public opinion will be branded as traitors by the nation. They become hated by the nation, which has happened in the case of law enforcement in Bangladesh, and which is extremely embarrassing for a nation. We want to make it clear that neither the police nor anyone else has the right to interfere in the legal and constitutional rights of the people of this country. The police must stop playing the role of party forces. All those arrested must be released immediately. The injured have to be treated. Respecting the demands of the countrymen and students, Narendra Modi's visit should be canceled.