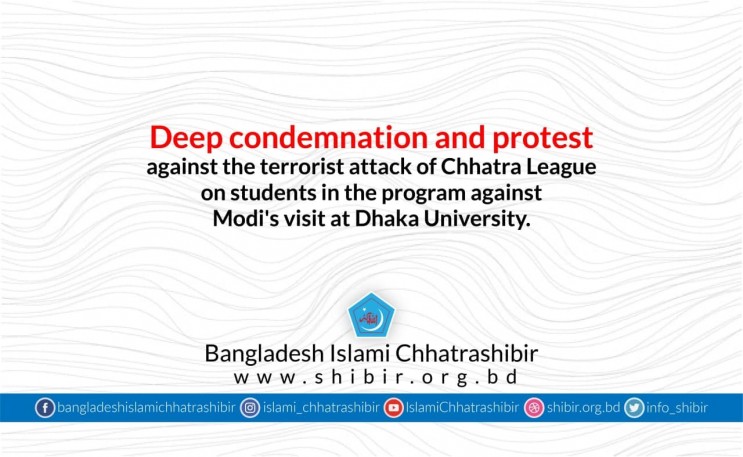 Bangladesh Islami Chhatrashibir has strongly condemned and protested the terrorist attack upon the procession of the Progressive Chhatrajote in protest of the visit of the Indian Prime Minister Narendra Modi to Bangladesh on the occasion of the golden jubilee of the independence of Bangladesh.

In a protest message, Chhatrashibir central president Salahuddin Ayoubi and secretary general Rashedul Islam said the Chhatra League terrorists had once again set a heinous precedent for terrorism at Dhaka University. On the occasion of the 50th anniversary of Bangladesh's independence, the BCL has launched an unprovoked attack on the protest procession and effigy burning program of Progressive Chhatrajote against the visit of Indian Prime Minister Narendra Modi. Twenty-five students, including two journalists, were injured in the attack. Whereas the general people and students of the country are angry over the arrival of Hindu nationalist Narendra Modi, the BCL has taken a stand against the entire student community. They have not only taken the opposite position, but have repeatedly attacked the students' just and peaceful protests. This proves once again that the student community has nothing to do with the BCL but they only work towards serving the whims of the illegitimate government. On the other hand, as always, the administration and the police are shamelessly supporting the terrorism of the BCL. Due to this, BCL is able to carry out their attack in a planned manner at the behest of the government. Basically, the history of Chhatraleague is the history of terrorism. Chhatraleague has always taken their stand against the student society in the politics of acolyte-ship.

The leaders said that the student community will not bow down to the terror of Chhatraleague. If the BCL continues its terrorist attacks on students in their struggle for a just movement, the consequences could be dire. We call on the administration to immediately arrest and prosecute the identified BCL terrorists who carried out the attack. Injured students need to be treated immediately. Effective measures have to be taken for the safety of the students. Respecting the demands of the countrymen and students, Narendra Modi's visit should be canceled.