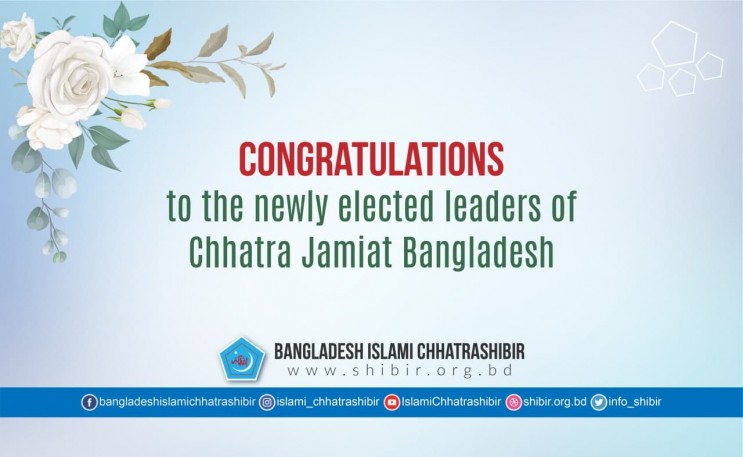 The leaders said that the ideological progress of the Chhatra Jamiat has continued amidst overcoming all obstacles. Chhatra Jamiat has played an important position and role in the student movement of the country. The organization was established on 24 January 1992 with the aim of establishing individual character, Islamic education and social system. Since its inception, the the organisation has gifted the nation with the qualified scholars and teachers at various levels; those who are serving for the country and the nation. We hope that the new leadership will play a positive role in making the ongoing constructive activities of Chhatra Jamiat Bangladesh more dynamic and uplifting, InshaAllah. At a time when Islam, Tahajib, Tamaddun, the country's independence-sovereignty, its democratic system and the youth society is morally endangered, we believe that the new leadership will advance the overall activities of the organization through constructive activities for Islam, the country and the student community.

The Shibir leaders expressed hope that this courageous leadership would move forward in the light of the Qur'an and Sunnah, while ignoring all obstacles, to build a student society in Bangladesh; and play a leading role in establishing the unity and solidarity of the Muslim Ummah. Insha Allah, the patriotic Islamic student organizations will work in unity to protect the independence and sovereignty of the country.