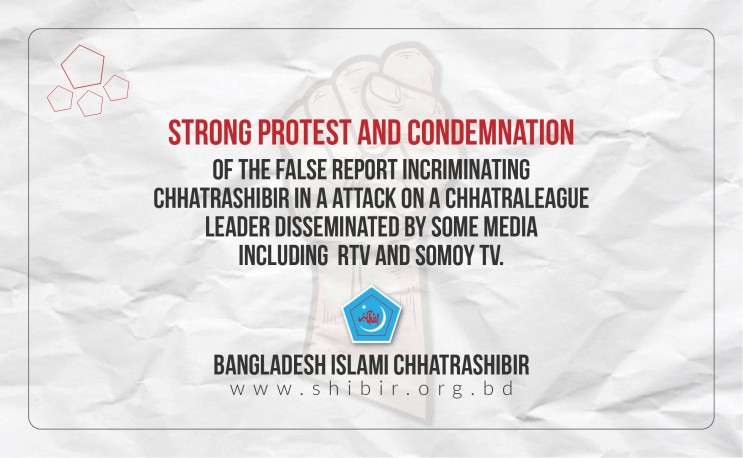 Bangladesh Islami Chhatrashibir has strongly condemned and protested against the spread of false and baseless reports by the private television channel RTV, Somoy TV and some other media outlets mentioning "Chhatra League leader's vein cut by Shibir!"

In a joint protest message, Chhatrashibir Central President Mohammad Sirajul Islam and Secretary General Salahuddin Ayoubi said some media outlets, including RTV, Somoy TV and Bangla Tribune had once again set an example of irresponsible journalism by spreading one-sided propaganda against Chhatrashibir. The reports have repeated the lies of the BCL leaders to cover up the incident of clash between the two groups of BCL without any sort of verification or information and to divert this ugly incident. Chhatrashibir has been shown as being involved in this incident, when it had nothing to do with this incident. The real incident is that an armed clash took place between the groups of the president and general secretary of Cox's Bazar Government College around 11:30 pm last Thursday over taking the responsibility of filling the playground of the government college. At that time, Zaker group of Chhatra League fired two rounds of bullets. When the followers of the general secretary Sakhawat's group fled, the terrorists of Zakir group attacked Sakhawat with rods, crutches and sharp weapons. He was later left injured and the attackers fled. This news has already been published in the national dailies with pictures of the clashes. Earlier, a clash had broken out between Zaker and Sakhawat groups over tender trade and two BCL terrorists, Abdullah and Shafiq, were injured. The clash was part of an internal feud between the president and general secretary of the college chhatraleague. This information should not have been unknown to the local representative of RTV or Shomoy TV. They have written a false report involving Chhatrashibir with this incident as part of shifting blame. We do not understand the level of irresponsible behaviour behind such heinous propaganda, even though Chhatrashibir had nothing to do with this incident. The reports were published on purpose containing complete lies.

The leaders said that whenever any misdeed of the Awami League and its allies is exposed to the people, such media outlets rise up to cover up these misdeeds. The biased behavior of these media is also largely responsible for the unabated brutality of the Awami terrorists. Such irresponsible actions are by no means indicators of healthy journalism. To hide one wrongdoing by publishing lies ultimately helps in encouraging another wrongdoing. It is unfortunate that the nation has to witness such irresponsible journalism from some media like Shomoy TV and RTV.

The leaders immediately called upon the concerned reporters and media to retract the fabricated report involving Chhatrashibir, and publish Chhatrashibir's protest statement. They also asked the journalists to refrain from publishing such false and baseless reports in the future.