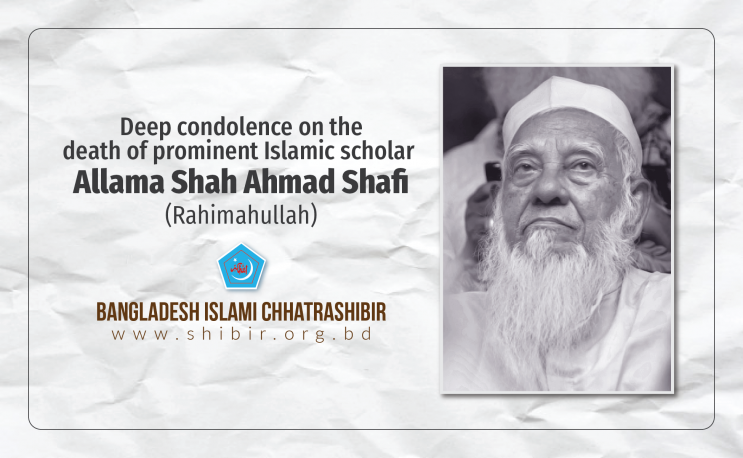 In a joint condolence message, Chhatrashibir Central President Md Sirajul Islam and Secretary General Salahuddin Ayoubi said that Allama Shah Ahmad Shafi Rahimahullah, a highly respected scholar, had passed away this evening while undergoing treatment at a hospital in the capital. Innalillahi wa inna ilaihi raajion (To Him we Belong, and to Him we Return). At his death, the nation has lost a loving guardian. He is a shining beacon not only in Bangladesh but also in South Asia. During his student life he studied with distinction from the prestigious Darul Uloom Deoband, and became a disciple of Shaikhul Islam Hazrat Maulana Hussain Ahmad Madani. After finishing his studies at Deoband, Shah Ahmad Shafi came to Bangladesh from India as a representative of Allama Madani and was appointed as a teacher at Al-Jamiatul Ahlia Darul Uloom Moinul Islam Hathazari Madrassa in Chittagong. Then in 1407 AH he became its Director General. Most recently, he has served as the Director General of the madrasa as well as Shaykhul Hadith. He played a major role in building lakhs of scholars in Bengal. He has written more than 40 books on various aspects of Islam in Bengali and Urdu.

On the other hand, he was a respected person to all regardless of party affiliation. He has played a huge role in the spread of Islam and defending the Islamic movement in the country, the unification of the Alem community and denouncing all anti-Islamic activities. He was uncompromising in his defense of Islam, the independence of the country and speaking for the rights of the people. He has led many movements from the front - protests against the demolition of the Babri Masjid, the construction of the Farakka Dam, the movement against the Islamophobe Taslima Nasreen, the protest against the government's enactment of anti Islamic laws and leading the anti-atheism movement. Through the establishment of Hefazat-e-Islam, he united the scholarly community and the common people and created an intense mass movement to stop the forces of atheism by the grace of the Almighty. His role in defending the independence and sovereignty of the country was very prominent. With his passing away at this critical moment, the nation has lost a Alem-e-Deen. God willing, his glorious contribution for Islam, the country and the people will always be remembered by the scholars and the nation alike.

We ask the Almighty for forgiveness of the soul of the deceased and extend our deepest condolences to his bereaved family. May Allah Subhanahu wa Ta'ala accept our beloved Alem-e-Deen as a guest of Jannatul Ferdous. Ameen.