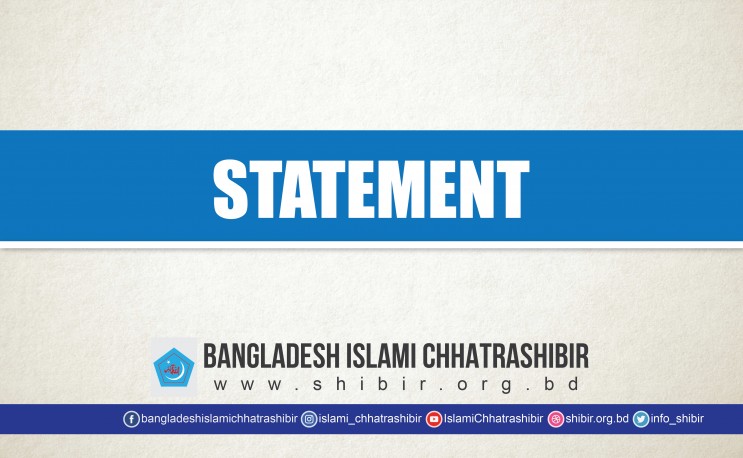 Bangladesh Islami Chhatrashibir has strongly condemned and protested against the publication of false and baseless news which tried to involve Chhatrashibir with the recently arrested Azam Khan in some media including Dainik Prothom Alo and Bangladesh Pratidin.

In a joint protest message, Chhatrashibir Central President Md. Sirajul Islam and Secretary General Salahuddin Ayoubi said that some media outlets, including Daily Prothom Alo and Bangladesh Pratidin had showed irresponsible yellow journalism. They have been continuously trying to tarnish the image of an idealistic organization like Chhatrashibir. Since its inception, Chhatrashibir has embraced the noble ideology of Islam and is moving towards the implementation of an ideal society with the youth and student society. Prothom Alo and its ilk ate trying to stop Chhatrashibir and tarnish that image by continuously publishing fake, slanderous and propaganda filled content on the organisation.

In their report on the arrested Azam Khan of Chittagong, the media outlets have falsely mentioned him as allegedly being a former Shibir cadre. In fact, Chhatra Shibir has had no distant relationship with Azam Khan in the past, nor does it have any relationship now. Despite such as allegation, the reporter or the authorities did not provide the slightest evidence in support of this heinous accusation. This allegation stems from an attitude of hatred against Chhatrashibir. We strongly condemn and protest against this irresponsible propaganda.

The leaders said the news published in the newspapers was false, fabricated and politically motivated. We hope that the two newspapers mentioned will refrain from serving such false, fabricated news and will take steps to resolve the confusion they have created by retracting the news and publishing our statement. The leaders urged the concerned media not to falsify while being engaged in a noble profession like journalism.