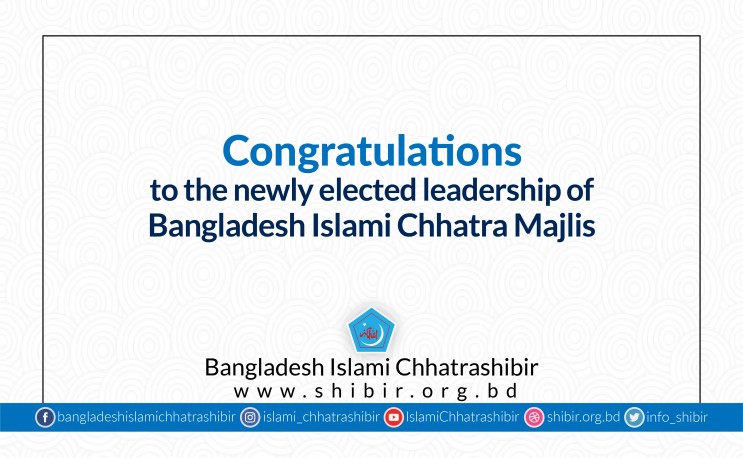 In a joint congratulatory message, Chhatrashibir Central President Salahuddin Ayubi and Secretary General Rashedul Islam greeted the re-elected Central President Muhammad Monir Hossain and re-elected Secretary General Bilal Ahmed for the 2021-22 organizational session of Bangladesh Islami Chhatra Majlis. The leaders of Chhatra Shibir expressed optimism that the newly elected Central President and the newly appointed Secretary General of the new committee of Islami Chhatra Majlis will perform their important roles and tasks efficiently and successfully as before. The election of the leadership of the Islamic Student Majlis is an important issue in context of the ongoing persecution and conspiracy against Islam and the Islamic movement. We hope that this efficient leadership will play a decisive role in making the activities of Bangladesh Islami Chhatra Majlis more dynamic and uplifting, InshaAllah. Clearly, Islamic Tahajib Tamaddun is under threat in the country. When the democratic system of the country is almost in danger of collapse, when the young society of the country is morally weak, in this situation, the expectation of the nation is that the efficient leadership of the Chhatra Majlis will take forward the overall activities of the organization through constructive activities for Islam, the country and the student community and will move forward fighting all obstacles to build the student society of Bangladesh in the light of Quran and Sunnah, and will play a leading role in establishing the unity and solidarity of the Muslim Ummah. InshaAllah, the patriotic Islamic student organizations will continue to work in unity to protect the independence and sovereignty of the country.

The leaders of Chhatrashibir wished the newly elected leaders of Bangladesh Islami Chhatra Majlis well-being and success in this world and in the hereafter.