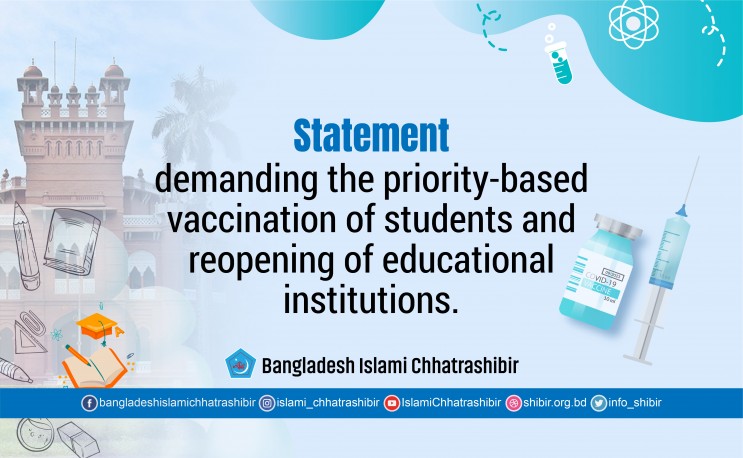 Bangladesh Islami Chhatrashibir Central President Salahuddin Ayoubi, and Rashedul Islam, Secretary General, said in a joint statement today that educational institutions have been closed for more than a year and a half due to the coronavirus epidemic. The closure of educational institutions is causing irreparable damage to lakhs of students. In response to the bleak socio-economic reality of the country, many students are turning away from education and going to work. This is a bad sign for the nation. Therefore, in order to protect the educational life of the students without any further delay, the educational institutions should be opened at the beginning of September. Students must be vaccinated on a priority basis.

The leaders further said that despite the fact that many countries in the world have higher infection rates than our country, they have kept their education system running, and have taken regular classes and exams. But in our country, the future of the students is being pushed towards uncertainty by increasing the period of closure of educational institutions. No sound plan has been put forward by the government to effectively regulate or administer the education system in these difficult times. Markets, shopping malls, government-private offices, tourist spots, and public transport are all up and running at a normal pace, all except the educational institutions. Government policymakers say that they do not want to put students at risk. But they are also not taking any initiative to vaccinate the students on priority basis either.

The leaders called on the government to stop playing tricks with students' education. Do not misuse the country's soft-spoken students as a tool to gain unethical political advantage. This heinous and anti-student decision of yours is pushing the country back for decades. We wish that you regain common sense and make the crucial decision to revitalise the education system of the country by opening educational institutions from the beginning of September. Otherwise, in the interest of the country and the nation, Chhatrashibir will be forced to take to the streets alongside the general students. We are always ready to challenge any immoral and political conspiracy in the interest of the country and its people.