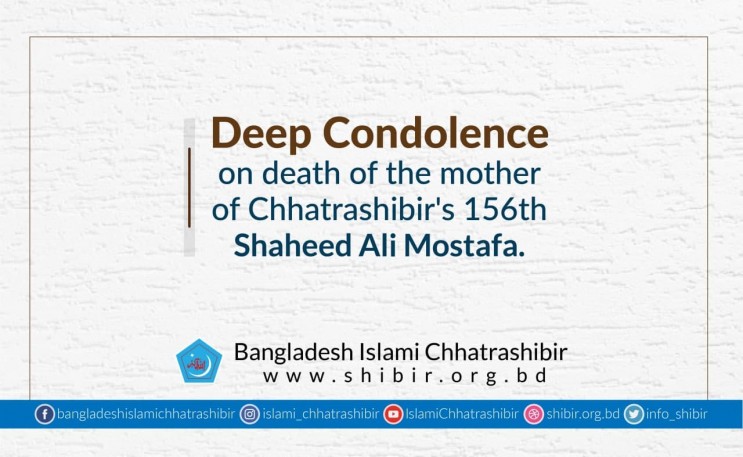 Bangladesh Islami Chhatrashibir has expressed deep grief over the demise of Anwara Begum, the revered mother of 156th Shaheed Ali Mostafa of Chhatrashibir.

In a joint condolence message, Chhatrashibir Central President Salahuddin Ayoubi and Secretary General Rashedul Islam said the mother of the 156th martyr of Islami Chhatrashibir, revered Mrs. Anwara Begum, died at a hospital while under treatment on August 2 after Maghrib (innalillahi wa inna ilaihi raajioon). At her death, Chhatrashibir lost a respected caring mother. Upon hearing the news of the martyrdom of her child, she had fainted and only regained consciousness after 9 days. From then until her death, she had major eye and ear ailments. Although her heart was heavy after losing her beloved child, she remained steadfast in the path of Islam. She never broke down but was a source of inspiration for the organisation. She loved the leaders and workers of Chhatrashibir like her own child. Her prayers, love, encouragement and direction towards Chhatrashibir cannot be forgotten in any way. All the manpower of Chhatrashibir are mourning the loss of the honourable mother of our beloved martyr.

We seek from Allah Ta'ala the highest station of paradise for the deceased and extend our deepest sympathies to the bereaved family members.

It may be mentioned that Shaheed Ali Mostafa was martyred in a peaceful program in Satkhira on February 28, 2013, after being shot at by police and BCL terrorists, when he joined others in protest against the verdict of the unfair tribunal against Allama Delwar Hossain Sayedee, a world-renowned Islamic personality, who had been convicted as part of a conspiracy by the Awami League government.