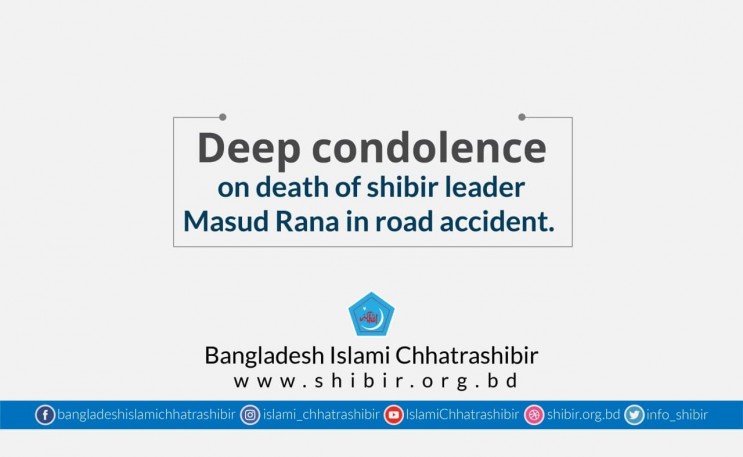 Bangladesh Islami Chhatrashibir has expressed deep grief over the death of Masud Rana, a meritorious student of Dinajpur Polytechnic Institute and President of KBM College Chhatrashibir, in a tragic road accident.

In a joint condolence message, Chhatrashibir Central President Salahuddin Ayubi and Secretary General Rashedul Islam said the talented student leader Masud Rana was a dedicated soul for the organization. At his death, the organization lost a dedicated leader. In his demise, Chhatrashibir and the nation has lost a promising, talented and honest citizen. We are deeply saddened by the loss of a gifted person like him. Masud Rana's love and passion for the Islamic student movement will be exemplary for us. We are deeply saddened by his tragic death.

The leaders conveyed their deepest condolences to the bereaved family and friends of Masud Rana. They prayed that Allah Almighty would grant the deceased the highest station in paradise.

It is to be noted that while riding on his way from Joypurhat to Dinajpur on motorbike, the wheel of the motorbike fell into a hole in the broken road, and Masud Rana fell under the tires of a moving truck and died on the spot (inna lillahi wa inn ailaihi raajioon). Masud was the second child among five children of Maksudul Alam, a member of Cheradangi Union Parishad and Imam of the mosque in Olipur Pulhat village of Dinajpur Sadar upazila.

The leaders said the accident site was already dangerous before the accident. In the last one month alone, 3 people had lost their lives in accidents at the same spot. The government is busy spreading the flowery narrative of development while the people are at high risk due to the dilapidated condition of the highways. This is is making government policy failure much more acute. We call upon the concerned authorities to take immediate and effective steps to prevent any further accidents.