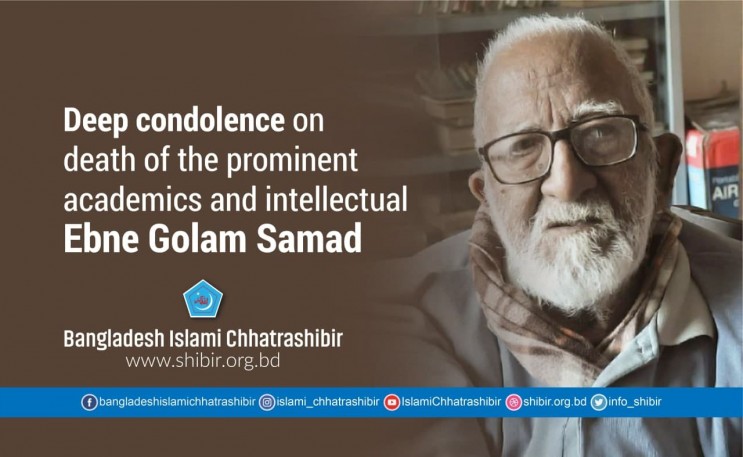 Bangladesh Islami Chhatrashibir has expressed deep grief over the death of Ebne Golam Samad, a former professor of Botany at Rajshahi University and a prominent academic, thinker, columnist and intellectual. In a joint condolence message, Salahuddin Ayoubi, Chhatrashibir Central President, and Rashedul Islam, Secretary General, said that the nation had lost a renowned intellectual, eminent teacher and guardian in the death of Ebne Golam Samad. The void that his death has left us is irreplaceable.

The leaders said Ebne Golam Samad the country's most senior intellectual, eminent academician, columnist, political analyst, heroic freedom fighter and writer. He has worked tirelessly for the country and for the people in silence, never expecting to receive anything in return. Ebne Golam Samad was a pure sacrificing patriot. He thought more about the future of Bangladesh than he thought about personal success. Ebne Golam Samad had a strong affection for Islam. Through his writings, he tried to prove that Islam was deeply involved in the national spirit and culture of this country.

The leaders said the eminent intellectual and veteran academic had been seriously ill for several months. He was admitted to Rajshahi Medical College Hospital with heart problems. Later he contracted the coronavirus. However, there he became victim of utter neglect and indifference. The level of neglect was such that this eminent person was forced to receive treatment at the verandah of the hospital. It is a shame for the nation. Prominent citizens, including 11 former pro-VCs had called on the government to provide better treatment for him. But the government did not listen to it. Such neglect of one of the best children of the nation is extremely painful for the country and its people.

It is to be noted that the late Ebne Golam Samad passed away at his residence in Rajshahi at 10:40 am today. Innalillahi wa inna ilaihi rajiun. He is survived by his wife, 4 sons, 2 daughters and numerous relatives and well-wishers.